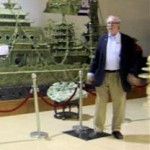 “When you are in your sixties today, you are still a relatively young person. But, I find that when you sit down to write about your life, you sure do feel old.” Quote from Rich Hoffner, USCS H-4456. These words reflect my feeling on this matter very well.

My interest in stamp collecting started when I was in grammar school and high school in the fifties. For the most part I collected US and worldwide stamps. For the world wide stamps I had a Master Global Stamp Album and a regular US stamp album. I also collected US First Day Covers. My collection remained dormant for many years until I stopped by a local country store in the 1990’s and noticed a number of covers that had been canceled on US Destroyers. I had been on active duty and in the reserves for 10 years and had served on a Destroyer Tender (USS Yellowstone AD-27). Destroyers seemed like a great place to start my new collection. I soon found out there were far too many Destroyers. When I was in the Navy Reserves at the Philadelphia Naval Shipyard (circa 1963-1964), I had been in a group that maintained the mothball fleet. One of the ships we worked on was the Battleship USS Iowa. While I was in college at Villanova, I spent two summers as Company Commander training reserves at the Philadelphia Naval Shipyard. We would march by the Iowa mostly every day. This Battleship connection lead me to look to Battleships, there were not nearly as many as Destroyers. Later in the Reserves, toward the end of the 60s, I drilled at Lakehurst in the blimp hanger. I wondered if I should collect Zeppelin covers. While I was on active duty I wasn’t too thrilled about the Navy, but as I get older and speak with some of the young people employed by my company, I appreciate the many experiences I had while in the Navy. I used to talk with a friend of Greek heritage, who was also in the US Navy, and it was great to speak with him about seeing Athens, Piraeus, the Acropolis, the Parthenon etc. During one Med cruise I also got to see Barcelona, La Spezia, Marseilles, Rome, Florence, Naples, Pisa, Paris, and more. Travel gives you a world perspective to pass on to your kids. My daughters, now in their 20’s, have been in London, Paris, Rome, Munich, Stuttgart, Salzburg, Amsterdam, Zurich, Seville, Vienna, Genoa, Beijing (twice), Shanghai, Bermuda and Mexico. By the time I left the Navy I was a Chief Fire Control Technician (being somewhat of a history buff I like to refer to my rate as a Fire Controlman, a right arm rate).

When I got back into stamp/cover collecting, I was fortunate to join the Burlington Vermont Chittenden County Stamp Club. Our Club had a number of serious exhibitors and at our annual stamp show we had as many as 36 frames and 3 national level judges from Montreal. For my first exhibit I chose the vast topic of Battleships of the world (I thought it was quite limited due to my past experience with Destroyers). The jury reminded me of the many items I did not include. But I received a Silver/Bronze award and I was quite pleased and encouraged. Initially, when I got back into stamp collecting I continued along with the US stamps. After spending a lot of money and time in that area, my interest was channeled into Naval Cover collecting. My current Naval Cover interests are mainly Crosby Covers and US Battleships. Crosby produced over a million covers, which was quite a feat (in the days of the letter press printer). I collect his photographic covers, thermographic covers and older covers. Occasionally, I produce cachets. Some examples are shown below. I received some awards in this area over the years including the 2005 Chittenden County Stamp Club Show Best in Show for my Beazell-Crosby Photographic Paper Covers exhibit. At the 2004 USCS convention I also received The Lone Sailor Award. It was very rewarding that in both of these shows the judges were people versed in Naval Covers. Finally, my company (MED Associates Inc.) maintains the USCS website and “The Photo Library”.

Some of my other interests have been Vermont Civil War history and, in particular, General George Stannard, who Vermonters feel won the war by repelling Pickett’s Charge at Gettysburg. My current reading interests are Isaac Isimov’s Foundation Series for the third time, Thomas Friedman’s “The World Is Flat” and Jim Cramer’s “Real Money”. In the business area, MED is currently working on computer vision. We are quite interested using high speed (100-250 frames per second) cameras to record and analyze rodent/fish behavior using both visible light and near infrared (NIR) light. Near infrared illumination allows the camera to see in the dark. In addition, surveillance NIR illumination is valuable in areas like monitoring driver attention and computing release parameters of air bags in a crash. Another of our business interests is DGPS (Differential GPS). With the proper receivers and calibration we can track objects to a distance of less than a meter, even to determining which track a train is on. At present, we have provided the US Coast Guard with several hundred beacon signal generators to go onto their GPS sites (see: Th http://www.uscg.mil/hq/c2cen/text%20site/dgps.htm . Currently, I serve as President of MED Associates Inc, a director on the Board of the USCS, the Commander of Vermont American Legion Post #1, the President of the Chittenden Country Stamp Club, a Trustee of the St. Albans Historical Museum, and member of various organizations including: Elks, Knights of Columbus, Vermont Philatelic Society, Vermont Historical Society and the Association of Philatelic Exhibitors. 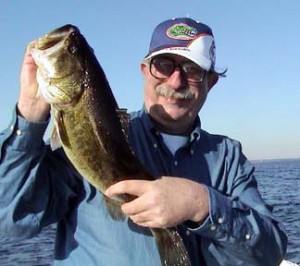 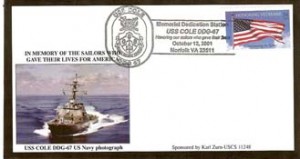 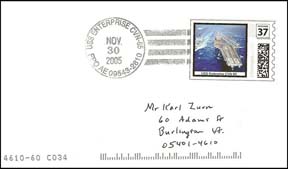