Listed with the permission of Log article author and former USCS President, Jackson Bosley, who poses the following question and then goes on to provide the answer:

How many covers do you have in your collection postmarked before 1929?

Probably not too many!

I was seeking the answer to why so few covers sent before 1929 are found in our collections. Was it

For example, when the USS ASHULOT sank off the China coast in 1883, only 19 of the 111-man crew were native-born Americans. I later learned that neither hypothesis mentioned above was correct.

After 1900, most of the navy enlisted force were U.S. citizens and were literate. The reason for the absence of navy covers postmarked before 1929 was the absence of organized cover collectors. The ship cancellation societies changed all this. What a joy to find a cover addressed to some of the earlier collectors, such as Everett Erie, Forest Swisher, Harry E. Klotzbach, Joe Hale, Dr. Francis Locy, C. W. Richell, William G. Crosby, and Dr. S. E. Hutnick. The one notable exception to these individual collectors: covers addressed to the Navy Savings Bank.

Most of the deposits came from the meager savings of enlisted sailors aboard ships throughout the fleet. 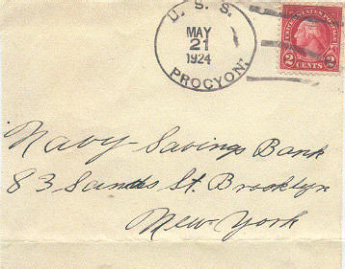 My interest in covers from the Navy Savings Bank led me to query the apostles of navy cover collecting, Jim Meyerson, Frank Hoak, Dave Kent, and Greg Finnegan. All answered my request promptly. They provided the information for (my) our article on the NSB, and I am greatly indebted to them.

Covers from the Navy Savings Bank

Have you ever heard someone say, “He spends money like a drunken sailor”? This may be true for some sailors, but a sizable group was adding to their savings accounts at the Navy Savings Bank, 83 Sands Street, Brooklyn, N. Y. from 1920 to 8 September 1930, when this small bank merged with the much larger Dime Bank of Brooklyn. At the time of the merger, the assets of the Navy Savings Bank were $1,500,476.

When the worldwide economic depression started in the fall of 1929, all bank investments and savings accounts suffered great losses in the crash. The depositors of many banks lost everything, but after the merger, the assets of the Navy Savings Banks in 1930 returned 85% of the monies deposited. This was a bank-bymail operation with most of the depositors from the enlisted ranks. During the period of the bank’s operation, the pay rate for first enlistees varied between $21 and $24 per mo nth plus a onetime clothing allowance of $88. Most accounts were less than $1,000. The mail-in deposits were from all active ships and shore stations of the Navy. The vast number of navy covers saved from this operation was due to one navy cover collector. 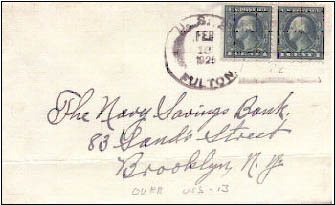 After all correspondence was reviewed, it was concluded that Charles S. Williams, Jr. was the actual collector.
This cover collector was Charles Sumner Williams, Jr. He studied at MIT but graduated from Harvard in 1917. He later became chairman of the Thomas A. Edison Company. Williams started amassing covers in 1923 and continued through the life of the bank. His continued access to these covers was through the position of his father, Rear Admiral Charles Sumner Williams, Supply Corps. Admiral Williams graduated from the USNA in July 1880 with the rank of Paymaster Ensign. He served at sea for several years as paymaster, and after the Spanish American War was appointed as the general storekeeper at the Norfolk, Virginia, Navy Yard. During and after World War I, he was CO of the Fleet Supply Base in New York City, where the Navy Savings Bank was formed. Admiral Williams owned the building at 83 Sands Street, where that bank was located. It is probable that Admiral Williams, as CO Fleet Supply Base and landlord of the bank’s office, was also on the Board of Directors of the bank.

Admiral Williams retired from active duty as a Commodore in 1920 but remained in the Navy Reserves. His Reserve rank was Rear Admiral. He died in 1936. There was some speculation originally that it was the Admiral who was the cover collector, but after all correspondence was reviewed, it was concluded that his son, Charles S. Williams, Jr. was the actual collector. Charles Williams, Jr., became interested as a navy cover collector around 1923 and over the years accumulated around 30,000 navy postmarks. 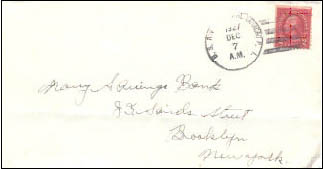 For present collectors, these covers contain some very rare cancels on commercial mail. The Navy Savings Bank covers are one of the major accumulations of pre-World War II covers today. Modern collectors owe a debt of thanks to such early collectors as Mr. Williams. Other cover lots saved were addressed to Alaska Sportsman, the Nation Art Novelty in Los Angeles and a military tailor in San Francisco but none as important and varied as those sent to the Navy Savings Bank. 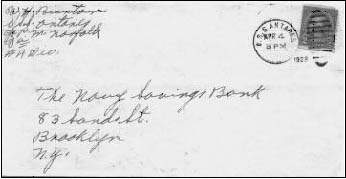