The largest expedition ever to visit Antarctica was officially titled “The United States Navy Antarctic Developments Project Operation” but is known today as Operation Highjump (1946-47). The objectives of this operation were:

1. Train personnel and test material in the Antarctic.

2. Consolidate and extend American sovereignty over the largest practical area of Antarctica.

3. Determine the feasibility of establishing and maintaining bases in the Antarctic.

4. Develop techniques for establishing and maintaining air bases on the ice.

6. Aerial mapping of as much of Antarctica as possible, particularly the coastline.

Assignments of ships to this Antarctic Expedition commenced on 26 August 1946. A total of 13 ships were chosen and they were assigned to one of four designated groups. The majority of the vessels began sailing for Antarctica in early December. Over the next three months, nearly 5000 men participated in Operation Highjump. For the first time, modern icebreakers visited Antarctica and even a submarine was included in the task force to determine if it would be able to operate in Antarctic waters. Helicopters were also used for the first time in Antarctica.

The Central Group reached the Bay of Whales on January 15, 1947 and established Little America IV, complete with three compacted snow runways. The aircraft carrier Philippine Sea carried six R4-D transport aircraft (Navy version of the DC-3) and Admiral Byrd to the edge of the ice pack. The R4-Ds successfully took off from the flight deck of the Philippine Sea using JATO bottles attached under their wings and reached Little America six hours later. Admiral Byrd flew in the lead aircraft. Extensive aerial mapping was then conducted by the R4-Ds flying from Little America including a two aircraft flight to the South Pole on Feb 15-16.

Operations for the Eastern Group commenced in late December 1946 in the vicinity of Peter I island, north of the Bellingshausen Sea. Brownson took up her position as a weather station and flight operations commenced. The following day one of the Martin Mariner flying boats crashed on Thurston Island during a whiteout, killing three occupants of the aircraft. It was not until 13 days later that the six survivors of the crash, including the commander of the Pine Island, were rescued.

The Western Group rendezvoused at the Marquesas Islands on 12 December 1946 and they reached the edge of the ice pack on Christmas Eve. The Henderson and Cacapon fanned out to serve as weather stations while the Currituk commenced flight operations on the 24th.

The greatest achievement of Operation Highjump was its acquisition of approximately 70,000 aerial photographs of the coast of Antarctica and selected inland areas. Unfortunately, a large percentage of the photographs were rendered useless due to a lack of adequate ground control points. Fortunately, this deficiency was rectified the following year by a much smaller expedition, Operation Windmill composed of the icebreakers Edisto and Burton Island, which succeeded in obtaining most of the needed ground control points.

Covers exist from all 13 ships involved in Operation Highjump. All of the vessels had post offices on-board with the exception of Sennet and Yancey. 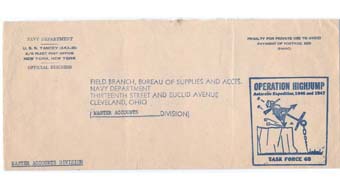 Data Sheet No. 26, published by the Universal Ship Cancellation Society, is a handy reference for anyone interested in collecting covers from ships involved in Arctic or Antarctic Operations. The data sheet lists all the ships that participated in the various polar operations from 1946 until 2003. In most cases the dates they operated in the Polar Regions are also specified.