Francis Locy was born in Lake Forest, Illinois, December 20, 1889. At the age of 27 he enrolled in the Naval Reserve as Assistant Surgeon. On August 30, 1917 he received a commission as Lieutenant (jg). During World War I, he served with the Sixth Regiment of Marines in France. He was awarded the Navy Cross and the French Croix de Guerre, with gilt star, for exceptional bravery and fortitude under enemy fire. He was cited for operating his first aid dressing station at Belleau Wood and Chateau Thierry under constant threat of enemy machine gun fire and poison gas attack.

Returning to the United States in 1919, Locy was assigned to USS PENNSYLVANIA, and the Naval hospitals at Washington, D.C. and Great Lakes, Ill. Further service was aboard the Navy’s only hospital ship, USS MERCY, USS TRENTON, and the Naval Hospital at League Island, Pa. During this period he received successive promotions to Passed Assistant Surgeon, with the rank of Lieutenant, and Naval Surgeon, with the rank of Lieutenant Commander. In September 1929 he departed for Haiti for duty with the First Brigade, U.S. Marines. 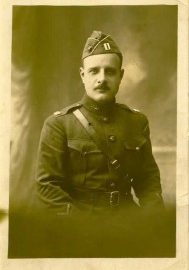 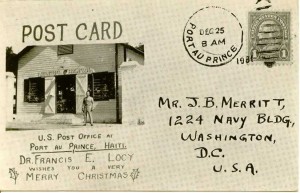 It was during this period of the 1920’sthat Dr. Locy began his extensive research and study of U.S. Naval postmarks. He engaged in correspondence with the few other serious collectors of the time, and published articles on the subject in the philatelic publications of the period. In the February, 1929 issue of the American Philatelist, official journal of the American Philatelic Society, he published an article outlining a classification system he had devised for government-issue postmarks used aboard ships of the U.S Navy. The scholarly article was thoroughly researched and included illustrations of the postmarks in question. So careful was his study that the classification system he proposed, with only updates and revisions that the changes of the years have brought, is still in use today. We remember him by calling it the “Locy” system.

Locy’s system identified nine different styles of postmarks issued through government channels. Later students have agreed that his Type 4 was really just a variation of the Type 3 cancel, and the Type 4 designation is no longer used. Locy also grouped all privately-made cancels under a classification that he called “fancy”, although even he agreed that many were rather plain. “Provisions 1” cancels were identified as those of original government issue that had been modified by the postal clerk in some way. Locy further described minorvariations in the postmarks by the use of small letters following the primary classification number.

In May 1932 Locy entered the League Island Naval Hospital as a patient. After several unsuccessful operations, he died on August 28, 1932, and was buried in Arlington National Cemetery.