October 15th will probably roll around without fireworks, a birthday cake, or even a song sung off key, but the USCS will turn 70 that day. For a philatelic society, that’s quite an achievement; only two or three other societies can claim to be that old or older. Most are johnny-come-latelys by comparison.

On 15 October 1932, York Briddell, Temporary Chairman, mimeographed Bulletin #1 in St. Petersburg, Florida. Marshall R. Hall and Harold P. Faust were Vice Chairman and Alfred E. Newman, actually co-founder, was listed as Temporary Treasurer. The Bulletin was four pages in length, page 1 contained a greeting message, page 2 listed mail clerks aboard ten different navy ships, a notice of launching of USS CONSTITUTION in 1797, page 3 had sailing dates of steamships and page 4 had information on naval ship movements and homeports. Bulletin #3, issued 15 December 1932 contained a listing of 79 members, which we can consider Charter Members of the Society. Of that group, only member #4, PJ. Ickeringill, is active in the USCS today.

Briddell continued to publish his newsletter, sometimes monthly, sometimes semi-monthly through April 15, 1935 when his candidate lost an election and editorship transferred to Dean C. Bartley in Seattle, Washington. Bartley’s first issue was titled The USCS Log, and the publication remained so since then. Briddell, apparently wounded because of the loss of his candidate, dropped out of the Society. Dues were initially 50 cents a year and members were asked to donate another 50 cents to pay the dues of service personnel who were listed in early rosters as Associate Members. By 1940, the USCS had a large number of Associate members many or most of whom were very cooperative in servicing naval covers.
Consequently, the 1930s were truly the golden era of naval cover collecting.
The early Logs were mimeographed and ran six to eight pages with information on both naval covers and merchant ships. From D.C. Bartley’s time on, the Log generally was published every month except during the years of World War II when six issues a year was the average. After the war, the Log gradually increased in size to about 12 to 16 pages per issue with a jump to 32 pages occurring in the past decade.
Over the years, the Log has had 25 different editors, from a three-month stint to one of 11 years and one month. For a time, early on, the editorship changed annually along with the President and other officers. Some editors served more than once and after World War II, a number of editors – Robert S. Thompson, Al DowIe, Frank Boylan, Jim Klinger, Howard Koeppen, and Bob Rawlins all held the job for in excess of five years. For over a year, while he was President, Herb Rommel also edited the Log.

Elections were held annually during the 1930s, but a new constitution was approved following WWII which put elections on a two year basis. After the war, the USCS Presidency turned over every two years and, to date, the USCS has had 38 different presidents. Jackson Bosley served two terms back to back, Rich Hoffner served two terms, split by others in between, and Dave Kent served his term and part of LaRita Longseth’ s who resigned suddenly mid term.
Nine past presidents are still living, eight still active in the USCS.
Membership in the Society increased rapidly from its inception. Five years after starting, membership was around 700 active. Membership dipped badly during World War II but recovered afterward and was up to nearly 1500 in 1969. Membership peaked at 1780 in 1983 and is currently just below 1500.
The USCS has spawned three different societies. About 1937, a group interested in merchant ship covers split off to form the Maritime Postmark Society, still in existence. Another group formed in 1935 to become the American Naval Cancellation Society (ANCS) whose members were primarily interested in cachets rather than cancels. Many members had dual membership in both the USCS and ANCS. The ANCS nearly sank during the war and finally succumbed to infighting about 1946. Finally, the Naval Shore Station Cancellation Society (NSSCS), another offshoot of the USCS, formed around 1940 but died a year or so later, a victim of the war.

So far, we’ve had a storied history. We can only wonder what the next 70 years will bring. 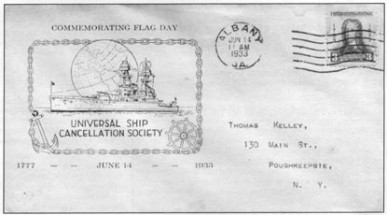 A 14 June 1933 cover issued for Flag Day. This cover features one of the earliest recorded uses of the USCS logo, nine months after the establishment of the Society.