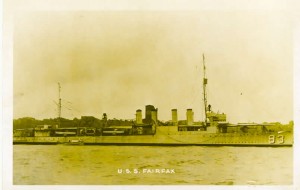 This photo of the USS Fairfax, DD-93, shows a typical four stacker destroyer of the kind traded to Great Britain, photo probably taken in the 1930’s.

In September 1940, the United States while neutral, traded 50 over age destroyers to Great Britain for 99-year rights to establish American national defense bases on British territory in the Western Hemisphere.

The ships were originally commissioned in 1918 and 1919. Some had been decommissioned since 1922 and were recommissioned to participate in the Neutrality Patrol or specifically to prepare for transfer to the Royal Navy. Each vessel was renamed for a town common to Great Britain and the United States. The ships transferred to Canada were named for a river common to the two countries.

By the spring of 1940, the U-boat offensive against shipping to and from Great Britain had the Royal Navy’s escort forces stretched to the limit. It was against this background that on May 15, Prime Minister Winston Churchill sent a cable to President Franklin D. Roosevelt requesting 40 or 50 older destroyers “to bridge the gap between those available and the large new construction underway”.

The President’s response was not encouraging, but the following month, after more heavy destroyer losses in the British Fleet, a further shift of naval strength in Germany’s favor due to Italy’s entry into the war and the surrender of France, a new plea from Churchill received favorable consideration.

Although the climate for providing the requested aid had improved, there were substantial obstacles to overcome. It was an election year and there was a strong isolationist sentiment among segments of the population and there were legal prohibitions to giving or selling the destroyers to a belligerent nation. Against this background, the possibility of trading the destroyers for British base site along the Atlantic coast was introduced.

After negotiations with Britain and the Attorney General’s legal opinion, which cleared the way, the agreement for the exchange was signed at 7 p.m. on Sept 2, 1940. Admiral Harold M. Stark, Chief of Naval Operations, signed the necessary documents certifying that the destroyers were not essential to national security the next day.

The first contingent of eight destroyers sailed from Boston for Halifax on Sept. 4 and arrived Sept 6. By coincidence, some of the destroyers arrived at the entrance to the harbor just as an ocean liner entered the port carrying the first of the British crews. The ships were transferred fully armed, lavishly provisioned, and with spare parts intact.

Obviously, the Navy and the destroyer personnel had been forewarned of the possibility of the impending transfer. The Commander of the Atlantic Squadron had been alerted on August 20 that the target date of handing over the first eight destroyers was Sept. 6 and the transfer site would be Halifax, Nova Scotia. The eight ships were commissioned in the Royal Navy Sept. 9, and five had reached the destination in the British Isles by the end of the month.

The other contingents were transferred to their new owners Sept. 23 and 24, Oct 8 and 23, Nov 26 and Dec 5, 1940. All of the ships, with one exception, served in the North Atlantic as soon as they had completed necessary initial modifications. The CAMERON, ex WELLES, was severely damaged during a German air raid while in dry dock at Portsmouth on Dec 5. Deemed unsuitable for active sea service, the hulk was studied to determine damage control and design information.

Typically, the remaining destroyers escorted convoys, performed minelaying functions, assisted ships in distress, rescued survivors, and attacked enemy submarines, assisted in the capture of one and the sinking of nine. In addition to the six ships initially transferred to Canada, eight more were manned for a time by Canada Crews, five by Norwegian crews and one by a Polish crew. Seven were loaned to the Soviet Union in 1944.

LINCOLN, ex YARNALL, had the distinction of serving under five flags. The service of HMS LEWES, ex CONWAY was unique in that she served on the South Atlantic station, in the Indian Ocean and with the British Pacific Fleet, the only one of the “Townes” to serve in any of these areas. Six of the veteran destroyers were sunk by U-boats and one was lost to a mine.

CAMPBELLTOWN, ex BUCHANAN was expended in the famous raid at St. Nazaire, France. The ship was modified, including the removal of the two after funnels and the addition of clinker screens to the remaining two, so that at a distance she looked remarkably like a German torpedo boat of the MOWE class. All non-essential heavy gear was removed to reduce her draught to 10 feet and her bows were packed with five tons of high explosives. On March 29, 1942, she rammed the outer gate of the Normandie Dock at 20 knots.

With the captain in Custody, the ship exploded, ripped the gate apart, and put out of commission the only dry dock on the Atlantic Coast which could handle the German battleship Tirpitz. HMS CAMPBELLTOWN did more damage to the enemy than any other “Town” destroyer and her crew won more medals than any other crew.

The overall contribution of the “Towns” or “Famous Fifty” as they are known to naval cover collectors, toward winning the Battle of the Atlantic might be summarized by two top-level naval experts, Admiral Stark and British Admiral of the Fleet Sir James Somerville.

A few months after Pearl Harbor, when enemy submarines were doing great damage to Allied shipping close to the east coast, a senior American admiral remarked bitterly to Admiral Stark how useful it would be to have some of the destroyers that had been handed over to the British. Admiral Stark replied, “Those ships have already been fighting for us for more than a year.”

After the war, Somerville stated, “Had there been no American “four stackers” available, and had they not gone into service escorting convoys when they did, the outcome of the struggle against the U-boats, and the subsequent outcome of the European War itself, might have been vastly different.

“The peoples of both America and Britain now realize that the Battle of the Atlantic was one of the most bitterly fought sea campaigns in history. It resulted in the certain destruction by the Allied Naval and Air Forces of 640 U-boats. Against a German strategy committed to ruthless expenditure of men and submarines to achieve its objective, Britain’s destroyer force, weakened by overwork and losses, became increasingly inadequate after Dunkirk.

“It was during this period that the “Town” destroyers began to arrive and at no time during the war was the need greater”.