My first introduction to philatelic interests began in the 1950s at the age of about 11 when I started sending away for First Day Covers. Since I lived in Ephrata, WA on the dry side of the State of Washington, I had no concept of naval covers at that time.

I cannot detail any Naval history in my family, but I was a member of the Civil Air Patrol in high school and went to many interesting summer two-week encampments at the air force bases in Washington State. In my high school years I played football and wrestled, taking second place in the state-wrestling meet.

My interests lead me to major in Sociology, and minor in Psychology at Washington State University in Pullman, WA, where I graduated in 1963. There I was a member of Lambda Chi Alpha and didn’t miss one of their parties or dances while attending school.

After graduation I went directly into banking at Seattle-First National Bank as a collector. I followed the banking industry up until I left it in 1999, except for a three-year exposure to the securities industry, where I learned securities were sold rather than bought. That was in about 1972 when they were turning the lights out in Seattle.

My banking career was very interesting in that I was in the lending, branch management and public relations part of it that exposed me to many very interesting people. For over 20 years I was a retail branch manager in various parts of western Washington. I enjoyed it so much that at times it was hard to believe I was actually being paid to do it.

My major diversion from work for many years was mountain climbing. This took me out most weekends and I have climbed most of the major peaks in the state of Washington and Oregon. My mountain climbing was completed with the ascents of Popotepacatl and Orizaba in Mexico.

While I was a branch manager in Bremerton I became involved with the Navy League as President of the Bremerton Area Chamber of Commerce. It seemed as if most of their significant events involved the Navy. In this association I went on two dependents cruises, one from Port Angeles to Bremerton on the USS Constellation and the other from San Diego to Seattle on the USS Ranger. (I was hooked on Naval Covers before I even knew what they were.)

For my second career after banking, I got a Master’s Degree in Human Services and am now employed as a Chemical Dependency Counselor at the Women’s Correctional Center in Gig Harbor, WA. This job is also very enjoyable where I meet a lot of very interesting people behind prison fences.

One day my wife and I were antique hunting and I saw a small package of naval covers for sale that interested me. After purchasing them I began looking for others and soon found that this was a whole area of philately that had escaped me all these years while my interests were dormant in that area. It wasn’t long until I was buying on eBay and going to stamp shows again looking for naval covers. What really got me involved was the very first time I saw Paul Huber set up in Portland a few years ago. I just didn’t realize how much and what type of inventory was readily available until then.

My interests mainly are in WWII or earlier covers. At first I specialized in submarine covers, but have now found myself branching out into different areas such as the Asiatic Fleet and the Great White Fleet. I prefer the philatelic covers and am focusing more on hand-painted and photo-cachets. As time goes on I seem to find a new specialty I like every few months.

Nowadays I have left the mountain climbing behind and my wife and I do a lot of walking, kayaking and antique hunting. We also terribly spoil our pet cat, Sunny, in just about any way we can.

Two covers I enjoy from my collection is Figure 1 A Wentz Mother’s Day cachet that was cancelled aboard the USS MALLARD on 9 May 1937. This cover is addressed to the cachet maker and has American Naval Cancellation Society servicing stamps from both Harry and Douglas Wentz on the back. The cancellation is a Type 3 and is tied to a Scott # 737 stamp with Coco Solo Canal Zone in the killer bars.

The other one is Figure 2 from the USS GUAM cancelled on 3 September 1953. This is a type 3 cancellation tied to a Scott # 684 with Shanghai China in the killer bars. This photo cachet is credited to M. B. Owens and mailed to C. G. Cross on the USS Blackhawk of the Asiatic Fleet.

I am looking forward to totally retiring in a very few years and devoting more time to collecting naval covers. I find them very interesting and a good way to learn about World War II history that was not yet written when I was first starting school. 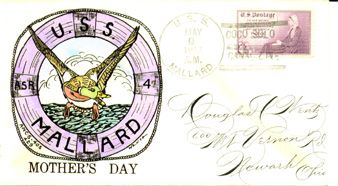