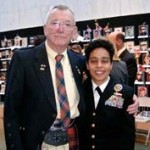 In 1951, when I was 10, I walked into a stamp dealer’s store in Mobile, Alabama (in those days, 10 year-old boys could do such things, safely). In his display case was a beautiful stamp, a blue one-schilling stamp of Aden with a dhow and the face of Queen Elizabeth. It was for sale for 14 cents, and I bought it (I had a quarter left over from the movie my businessman father had sent me to see to keep me out of his hair on a Saturday), beginning my love of stamps. My small boyhood collection is long gone now, but about 35 years or ago I fell in love all over again, this time with naval covers. As a warrant officer aboard a small ship (RECLAIMER ARS-42), one of my many collateral duties was to apply the ship’s cachet to collector’s mail. It was the “hook” that got me started. Today, my main interests are: Yangtze era gunboats, submarines, ships named for Marines, and what I call “Pennsylvania’s Navy.” PA Navy is any ship named for a PA place, famous person, or sent to or from PA. I am building an exhibit that will showcase “Pennsylvania’s Navy,” hopefully to exhibit, but of equal importance to display in local libraries, schools, and other public places to promote the sea services and their connection to PA. (My wife, Ann Marie also has a fairly large collection of naval covers with Christmas cancels and/or cachets.)

While in high school, I majored in sports. Football, basketball, and baseball were my favorite “subjects.” As a result, I had an awful transcript, and had little chance of getting into a college (I was courted by several small colleges for football, until they read my transcripts). So, I joined the Navy in 1959 and served until 1988. Every military career is totally unique, there has never been and never will be two exactly alike, and most career servicemen think that their career was the most unusual, and I am guilty of that. I served in a wide variety of vessels, a store ship (ZELIMA AF-49), submarine (GEORGE WASHINGTON SSBN-598), aircraft carrier (SARATOGA CV-60), salvage ship (RECLAIMER ARS-42), submarine rescue ship (COUCAL-ASR-8), floating dry-dock (OAK RIDGE ARDM-1), and submarine tenders (HOLLAND AS-32, HUNLEY AS-31). In addition, I served three years as a Navy Recruiter in Connecticut and New York City, for a year “in-country” in Vietnam, and ashore at NAS Pensacola, and Naval Submarine Base, Kings Bay, GA. While serving, I managed to earn a BS by attending the University of Hawaii, University of Maryland (Holy Loch), University of Maryland (Rota), University of West Florida, and Valdosta State College. It only took twelve years.

In my naval service I had the great privilege of being enlisted for 12 years, a warrant officer for 4 years, and a deck LDO (Limited Duty Officer) for 13 years. Some of my favorite memories are: chief’s initiation, qualifying for submarines, living in Hawaii, Spain, & Scotland, and serving with some truly great shipmates. One of my favorites is pictured with me, RDML Michelle Howard, who is currently the Senior Military Assistant to the Secretary of the Navy. While I worked for or with (in a wardroom) at least a dozen men who went on the flag rank, and they were all fine officers, Michelle is the only future flag officer who worked for me. She reported aboard HUNLEY in 1982, as a fresh caught ensign right out of the Naval Academy. I was a LCDR and the interim executive officer and later first lieutenant of HUNLEY. Michelle was a deck officer and later a division officer in the repair department. Even then, it was apparent that she was destined for big things. She went on to be the first African-American woman to command a Navy warship (RUSHMORE LSD-47), then becoming the commodore of PHIBRON 7. In April 2007 she became the first woman graduate of the Naval Academy and the first member of the Naval Academy class of 1982 to reach flag rank. Watch her career, who knows where it might go from here? At her April 20th, 2007 frocking ceremony, the Secretary of the Navy Donald Winter said, “there will be more stars in Michelle Howard’s future.” Pretty strong stuff for a public statement.

After naval service, I owned and operated a general bookstore in St. Marys, GA for eight years, worked full-time for the American Red Cross for a year, and did three-months consulting at the Headquarters of the U. S. Coast Guard, working on enlisted programs issues facing the USCG in the 21st Century (Future Force 21). While at the USCG HQ, I came across an ad for a job at Scotland School for Veterans Children (SSVC), in Scotland, PA. Applied, got the job, and worked there until I retired in 2002. SSVC is a state owned private school solely for the children and grandchildren of Pennsylvania’s veterans. It is a marvelous school whose legacy harks back all the way to the aftermath of America Civil War.

Throughout the past 20+ years, I have also been active in community service, having served in Rotary International in local, regional, and international leadership positions as club president, district officer, and district governor. I am currently also on my borough council and am on the board of directors of a regional tax collection bureau.

Since I am now fully retired, I have recently focused on writing some articles for the USCS Log, with an article on the screw steamer (circa 1859) USS PENSACOLA in January 2007, a story of another of my wonderful shipmates, SMC Bill Rice in March 2007, and starting in July 2007, a series of articles on ships named for Marines, titled Floating Honors. Along the way, I edited Data Sheet #22 (US Navy and MSC Ships Named for U. S. Marines), and authored a new Data Sheet (#32 – Ships Named for Significant Military or Naval Events). 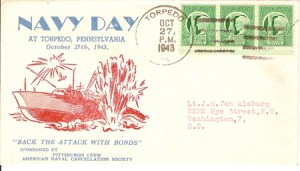 An ANCS Pittsburgh Crew Navy Day 1943 cover posted in Torpedo, PA. Torpedo, PA is nothing more than a spot on the road today, about half way between Pittsburgh and Erie. It no longer has a post office.