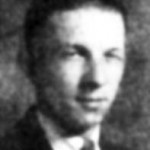 The name C. Wright Richell is well known to many naval cover collectors. He produced cachet designs for no less than 56 individuals, USCS chapters and ANCS crews during the “Golden Age of Cachets” before World War II. A check of Social Security records reveal that a Clarence W. Richell was born on June 6, 1907 and died in July 1965 in Ohio. His designs were very well done and professional. Anyone who has seen one of his cachets will recognize his work.

C. Wright Richell, sponsored by Marshall Hall j(USCS #10), joined the USCS on December 13, 1933. The USCS Bulletin (#29) gives his residence as 2332 Neil Ave., Columbus, Ohio. A month earlier (11/12/34), Hall had reported that there were nine prospects ready to join the Oliver Hazard Perry Chapter #5 in Columbus. C. Wright Richell was one of them.

An article in “Stamps Magazine” in April 1935 notes that Richell was 27 years of age, a native of Ohio, a graduate of Ohio State University and a Second Lieutenant in the Field Artillery Reserves. He was the “Commanding Officer” of Columbus’ USCS Oliver Hazard Perry Chapter #5, but that would be short lived. The chapter chose naval titles for their elected officers. Richell was Registered Cachet Director #73.

His introduction to cachets came in November 1933 when a friend (Marshall Hall) asked him to design a cachet for the Perry Chapter. The cachet depicts a map of Ohio with miniature drawing of Perry’s Victory on Lake Erie and wording Oliver Hazard Perry Chapter #5 Greets Old Ironsides. Covers were posted aboard USS CONSTITUTION on January 1, 1934, while Old Ironsides was at San Diego, CA. His first series of cachets were hectograph covers, co-sponsored with fellow chapter member, Donald Schramm (USCS #194) that were posted on the USS CONSTITUTION in 1934.

Richell’s prowess with designs extended beyond naval cover collectors, as the same article mentions that three cachet designs were among the Royal Family of Ten for 1934. Richell’s design for Labor Day 1934, sponsored by Russell Sheets (USCS #456) posted aboard USS NORTHAMPTON, USS MEDUSA and USS RICHMOND won top prize (King of Cachet). Two other designs were among the remaining seven cachets: the Independence Day cachet, sponsored by Robert Manley (USCS #152) posted aboard USS GOLD STAR and Richell’s own celebrating Perry’s Victory at Lake Erie, posted aboard USS PERRY (10 SEP 1934). Both Sheets and Manley were members of Chapter #5.

However after the 1935 USCS elections (Hall lost to Bartley), the Perry Chapter disbanded as Marshall Hall resigned from the USCS. Hall formed the American Naval Cancellation Society on April 15, 1935. Richell (ANCS #6) followed Hall, along with Margaret Gilliland (ANCS #5) and William V. Miller (ANCS #7). USCS records show that Richell renewed his USCS membership in December 1934 and again February 1936 but he dropped out after that. Richell is not listed in the 1938 USCS Year Book or any further year books.

As a member of ANCS, Richell served as its President during the1937-38 term. He was listed on the 1940 & 1942 ANCS rosters. Richell designed many a cachet for the ANCS crews, namely the Argonauts, Freebooters, Golden Bear and Shenandoah. He drew cachets for many of the well known cover sponsors, including Alex Hesse, Taze Nicholson, Walter Crosby, Douglas & Harry Wentz. Many of the designs celebrate holidays, anniversaries, fleet maneuvers (New York Fleet Review) and historical events.

The “Stamps” article mentions that Richell was interested in many things nautical, including ship pictures and models. For many years, Richell had an interest in model building, as well as the drawing and painting of naval scenes and ship pictures. An issue of Popular Mechanics (October 1923) contains a short illustrated piece titled “Novel Mounting for Spider-Web Coil” by C. Wright Richell of Columbus, Ohio, that speaks to his design skills.

The USCS recognized him as one of most influential persons in the hobby of naval cover collecting. As a talented artist and cover sponsor during the Golden Age of cachets, Richell was inducted into the USCS Hall of Fame in 2002. 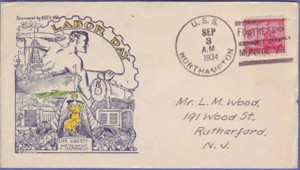