Looking back, I often wish that I had known about the USCS when I was a midshipman at the Naval Academy during WWII. Or even after I was commissioned in 1947 as an Ensign. Then, I had the whole Navy to solicit for covers – and 1 was even eligible for free franked mail. Oh, well.

In those days, we could select our preference for our first duty after graduation in the order in which our names were picked from a fishbowl. My preference number was 480 out of 500, so ended up on an amphibious ship in Norfolk, not good duty, but I did meet met my future wife there. USS ADIRONDACK AGC-15 was used as an office by a flag officer and his staff, so seldom left the pier. Fortunately the ship was scheduled for decommissioning and I wangled a transfer to real sea duty in BEXAR APA-237, JAMES C. OWENS DD-776 (which I decommissioned) and then BRISTOL DD-857 out of New Orleans and Newport.

I applied for and was accepted to Submarine School and served in BLENNY SS-324 and BAYA SS-318 in San Diego, then PICUDA SS-382 in Key West as XO after a tour at me Naval Postgraduate School. In 1959, Admiral Rickover summarily ejected me from his office, but, even so, I got orders to Nuclear Power School. I commissioned THRESHER SSN-593 as XO, then ALEXANDER HAMILTON SSBN-617 also as XO and finally got a turn at command in TRITON SSN-583 out of Norfolk and DANIEL BOONE SSBN-629 Gold based in Guam. The upside of that tour was that our families lived in Hawaii, so we got to eat fresh pineapple six months of the year. With BOONE slated for overhaul, I flew to Amsterdam to join my next command, HOLLAND AS-32 en route to Rota, Spain where we serviced a squadron of SSBNs. Three years in the Pentagon and three more as CO of the Naval Sub Base at Groton, CT finished my 30 year career in the navy. All in all, it was an exciting time with a good part of my service “holding off the Red menace” during the cold war.

Back to the USCS. While we were in Hawaii, my fifteen year-old son somehow heard about the USCS. He wanted to join but did not want to pay the two dollar dues to do so. I offered to split the cost and he sent off his application. Now, why could he not have done that when he was two or three?

When we moved to Spain, son Geoff elected to stay in Hawaii where the surfing was good and I kept up his membership but did not actively collect, a big mistake since I was in a great position to do so. When we moved to the Washington, D.C. area in 1971, Bill Lawton of the Admiral Byrd Chapter immediately invited me to attend their meetings. So, one snowy evening, my wife and I braved the storm, drove to someplace in Maryland, really enjoyed the people and were hooked.

I was welcomed by Stan Honeyman and the Nathan and Hale gang when we moved to Groton and met a wonderful group of USCS members who helped me tremendously in developing a collection. Ray St. John got me started in exhibiting and I’m forever grateful for his incisive yet encouraging comments on my first effort. When attending stamp shows, I tried hard to get to the naval cover dealers before John Milewski and Lorraine Kozicki snatched up all the good stuff but seldom succeeded. I retired in the SF Bay Area and, of course, joined the Saginaw Chapter, then led by Ray Costa and Jack Howland, two really knowledgeable and devoted collectors. For a time, I worked with Bechtel Corp in Pennsylvania and regularly attended Stephen Decatur Chapter meetings at Rich Hoffner’s home. I designed my first cachet for one of Rich’s nuclear sub anniversary covers and continued doing that for several years.

Stan Honeyman convinced me to run for the board of directors but I ended up an also-ran in the first effort. I succeeded in 1979 and now am next to Dave Kent in seniority on the board. In 1978, I was sorting covers for sale in the car as my wife and I drove to Seattle for a convention. Who did all these cachets, I wondered? I put the covers aside and that became the start of the Naval Cover Cachet Makers’ Catalog. In 1980, La Rita Longseth, who was then USCS President, suggested I write something of interest about navy life for the Log, and I’ve been boring members with my blather ever since. In 1989, Jim Klinger abruptly resigned as Log editor. By happenstance, I had been to a computer show a few months earlier and talked to Phyllis Newman, a PC group member, about desktop publishing. Rich Hoffner was urgently looking for a volunteer, so I called Phyllis who offered to help. I edited the copy, she did the desktop portion and Norman Cohen of Adventure Graphics did the publishing. I took over the desktop portion a year or so later and, with member cooperation, was able to grow the Log from 16 to 32 pages per issue by the time that Richard Jones took over in 2000. Of course, I had great help from Jim Russell, Taze Nicholson, Dave Kent, Jim Myerson, Jay Milewski, Dave Bernstein , Bernhard Vesper, George Benz, John Young, George Saqqal and so very many other contributors along with Joe Lynch as Art Editor that it was a great run.

All this may sound as braggadocio, but them’s the facts, folks. I’m also very proud of talking Steve Shay to act as USCS Secretary and to have had a hand in convincing Paul Helman to run for the board and then as President.

I started collecting nuclear powered ship covers, then submarines, then cacheted covers of all sorts, more recently postmark errors and 19 th century navy mail. I really enjoy the challenge of exhibiting and do so at USCS conventions as well as local and national shows.

I think the USCS is a great society made so by its members who are invariably trustworthy, helpful, friendly, kind, cheerful and always courteous. Boy and Girl Scouts all. 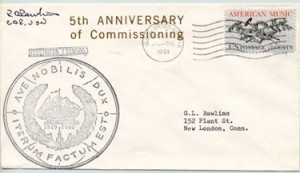 First cover sponsored by Bob Rawlins when he was CO of TRITON. Cachet is rubber stamp ship’s insignia plus two line legend stamped in gold foil. Less than two dozen covers were done for whatever collector mail was on hand. Cover is addressed to Bob’s son, Geoffrey.