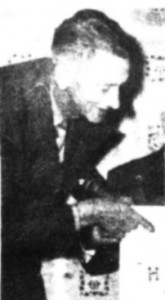 You may already be acquainted with Chester Knowlson in the field of naval cancellations, as you may have covers addressed to him or some of his relatives. He was born in Troy, NY on April 14, 1894 and when he completed two years of Electrical Engineering (high school) he was ready to embark on a career. In his own words as written by the Fleet Reserve Chief Yeoman in February 1940, one day while passing the post office his eyes caught a glance of a flag flying from the Navy Recruiting Station and the attractive “A” sign depicting a battleship.

His spirit of adventure was aroused and with the consent of his parents, he was accepted into the service on February 21, 1913. Bluejacket’s Manual (1917 ed) states that Apprentice seamen under 18 must have consent of their parents. He wrote the following in the column “Know Your Neighbor” in the USCS Log (15 FEB 1940) that “…Life after this was not exactly “Home Sweet Home”, but the longer I stayed, the better I enjoyed it. Before I realized it, the years slipped by and I found myself at the period when civilian life was at hand.”

His early years in the Navy, saw him serve aboard CONSTELLATION, NORTH CAROLINA, GEORGIA, NEBRASKA, MICHIGAN, RHODE ISLAND and then five years in the submarine service on L-N-O-R and S class submarines. During the war, he was commended by the Secretary of the Navy and served in both the Haitian & Mexican campaigns. Finally he returned to battleships- finishing up aboard the USS WYOMING (flagship) as Secretary to the Admiral of the Scouting Fleet.

Chester married his first wife, Marie in 1917 and according to the 1930 census the Knowlson household consisted of him (age 35), his wife, sons Chester S. (age 11) and Donald (age 8 ) and daughter, Marie T. (age 10). A second daughter apparently was born after the census, as he mentions in Log article that family (1940) consisted of two of the finest girls and boys any father could hope to have. His wife, Marie passed away in 1936 and his hobby of naval cancels was his only solace.

Uncacheted covers (1938-39) bear an address label and stamped addressee, Miss Barbara E. Knowlson, same Philadelphia address as her father. She would probably be seven or eight years old, as she was not mentioned in the 1930 census – residing at 5649 Angora Terrace, Philadelphia, Pennsylvania. Being a widower with four children probably got Knowlson into the Fleet Reserve.

After his release from active duty (1936), he taught religious training at Boy’s High School, was an electrical engineer, the Superintendent of Sanitation and served as the Boy Scouts’ treasurer in Philadelphia for ten years. He collected stamps for years, especially those issued in 1917, off set printing and air mail issues. In 1926, Chester met LCDR Francis Locy, who persuaded Knowlson to take up collecting naval covers. Locy had operated on him while he was assigned to the Philadelphia Naval Hospital. Together, they worked on naval cancels.

He joined the International Postal Marking Society (#274) in October 1932 and almost immediately wrote an article on the Rotating Reserve Destroyers re-commissioned at the Philadelphia Navy Yard. He reported that approximately 150 first day covers were canceled on each of the 14 destroyers, with only USS DAHLGREN having its first day on Independence Day 1932. A checklist published in Brennecke’s “U.S. Historical Cover Catalog (1935)” reveals that some destroyers had different wordings between killer bars.

Knowlson admitted he joined the rival ANCS (1936) before coming aboard the USCS. Recruited by H.J. Lindhardt, “Chet” was listed in July 1937 Log as #1444 C.S. Nelson, 5649 Angora Terrace, Philadelphia PA, as was #1445 Horace P. Barringer, Troy NY. They may have been related, probably through marriage (Barringer’s sister married a Knowlson). Both served on the USCS Naval Expert Committee with “Chet” Knowlson serving for three years and editing both issues of the “Council Register of U.S. Naval Postmarks” pamphlets.

Knowlson wrote the Shipwriter’s column (JUN 1938- JAN 1939) giving data and information on naval cancels and events, e.g. keel layings, launchings, and commissionings. He wrote the “Naval & Seapost” column in Mekeel’s Stamp news. He wrote that he enjoyed other interests like fishing, hunting, hiking, and camping but his main interest was centered in the welfare of family, home and his job.

Among his other accomplishments in the world of navo-philately are: 1938 – purchased the Locy collection at a Eugene Klein Auction (12/9/38) in Philadephia, 1939 – elected a USCS Director (5) receiving 183 votes for the 1939-40 term; he then organized the Naval Shore Station Cancellation Society with John Gillespie for collectors of Fleet, Station and Marine Corps cancels. (Note: it appears from a notice under “Re-instatements” that Knowlson with Robert Scheid were responsible for both Robert W. Matthews (#65) and Thomas M. Holcombe (#94) rejoining USCS in September 1939. Looks like there was an attempt by the leadership to bring back older members who had jumped to ANCS in April 1935. ), 1940 – elected USCS 2nd Vice President for the 1940-41 term and served as the ANCS Regional Director (Civilian) and on its Postal Relation Committee, 1941 – elected USCS President for the 1941-40 term, receiving 234 of the 235 votes cast. Everett Wallster got one vote. A paid political advertisement by the All-American Ticket representing both civilian USCS members and the Navy and Marine Corps appeared in USCS Log (FEB 1941) It’s theme: KEEP EXPERIENCE IN OFFICE with Knowlson and his team. Decatur Chapter took a similar advertisement endorsing Knowlson, Vic Reichenbach for Secretary-Treasurer and Anthony Fernandez for Director-at-Large. Only Knowlson & Reichenbach won election. Back then, chapters would nominate candidates that ran for National office, usually as favorite sons.

Several factors almost caused the collapse of the USCS after the election. Some go as far to blame “Chet” Knowlson, but an explanation can be found in USCS Log, written by Joe Hale (JAN 1942), that defended him because monies and records were not turned over in a timely fashion. Joe mentions that records took six months, while the society’s monies did not come east until after the 1941 convention. All necessary expenses incurred were paid for by Knowlson himself. The last Log published was April 1941 with editor, David Brockton Browne. He had been elected the society’s second V.P. but was activated, along with all California National Guardsmen in March 1941. Looks like there was no time to get a new editor, as well as no time for communication between both the incoming and outgoing administrations.

Past president Mike Owens had been recalled to active naval service, assigned to USS NEVILLE, Portland OR. Shortly before the 1941 National Convention, Chester Knowlson was called back into service, assigned to recruiting duty in Philadelphia and his duties prevented him for giving time to the USCS. He resigned his presidency. It also appears that Knowlson got remarried during this time, as USCS #2128 was assigned to Mrs. Elinor M. Knowlson (April 1941 Log). The ANCS “Navigator” reports that the all attended the USCS Convention in Boston i.e. Knowlson, Owens, Hale and there was talk of a consolidation of all naval organizations. Guess, the Axis Nations had other plans

Chief (C.S.C) Knowlson had several changes of addresses, e.g. Naval Air Station, Trinidad, BWI (12/42), Amphibious Training Base, Norfolk (3/44), Camp Bradford, VA (4/44), Stewart Hotel, San Francisco (5/45) and Veteran’s Administration, Palo Alto, CA (7/45). He was listed as retired Navy Chief Petty Officer residing in San Francisco, where he recruited naval cover collector, Fred Baumgartner (USCS #2377) and it appears he either worked for the VA or was confined to its hospital in California.

After his retirement, Knowlson returned to Reading (Reiffton) PA. Resuming his hobby, Knowlson started sending cover requests to naval ships, especially those vessels conducting polar exploration. To enhance his covers, he enlisted the aid of a daughter’s name i.e. Patricia E. Knowlson (USCS #3138J), Margaret E. Knowlson (USCS #4128) to get better cancels from the mail clerks. It should be noted that both Anthony Fernandez and Jim Russell used female names too. Anyone got a cover addressed to Jane Russell?

According to Jim Russell, Knowlson stopped using the daughters name when a sailor knocked on Knowlson’s door and asking to take “Patty” out on a date. Knowlson was listed as a staff member (ASPP #5) in the first issue of the American Society of Polar Philatelists’ Ice Cap News in January 1956. His specialty- U.S. Naval Expeditions.

USCS Records indicate that Knowlson’s daughter wrote (9/12/67) that her father was no longer interested in naval covers. Social Security Records reveal that death benefits were paid in April 1969 for Chester S. Knowlson, born April 14, 1894. Whatever became of the Locy’s collection? I know I have some and they can be identified by a Knowlson circular cachet on the reverse. I wish to thank Greg Finnegan for sending the emails of his research on both Knowlson & Barringer in September 2004.