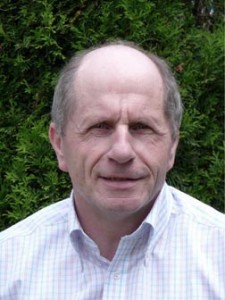 “You can’t start a fire without a spark”. These lyrics from the song “Dancing in the Dark” by Bruce Springsteen perhaps best reflect how I got started with collecting naval covers.

In January 2009 I was browsing on eBay for “El Paso” just to see what may be the result. One of the items caught my eye: A commissioning cover (Beck #B828) from the USS EL PASO (LKA-117). My eyes stopped at the date of the cancel: 17 January … day and month of my date of birth! I bought this one as my first naval cover, just to add to the memories of the sunniest years of my life, because I had a chance to live and work for five years in the west Texas City of El Paso.

I’m a naval cover collector from Germany and live in the City of Meckenheim (pop. 25.000), located about 10 miles southwest of Bonn, the former capitol of Germany. I have been employed by the State of Germany since 1972 and work as a civilian Administrative Officer in a department of our Armed Forces in Bonn.

Just married to my wife Monika, in 1976 I was chosen to do a job in our Administration Office at the Fort Bliss Air Defense Artillery Center in El Paso. Our Main Office for the USA and Canada region is located at Washington D.C. Fort Bliss today is the second largest garrison of the German Air Force outside Germany. We started our “honeymoon” in October 1976 and it would last until October 1981. We took our opportunity to get in touch with your wonderful country and people while traveling by trailer. We planned our tours along the scenic wonders of America and mostly used campgrounds in national and state parks. Our “Adventure USA” was highlighted by the birth of our sons Stephan (1978) and Klaus (1981). Born in El Paso they automatically received dual German/US Citizenship.

It took nearly 60 years to get on with collecting naval covers but since I was a little boy in the 1950’s I always was interested to know all about battleships. It began when a boy from the neighborhood showed me scale-drawings of German WW II battleships like the BISMARCK. Later on I started reading books about sea warfare and the history of battleships. El Paso was a good place to buy a lot of interesting books. One of our American friends (still) runs a hobby shop and so it was only a matter of time that I called a motorized FLETCHER-Class destroyer model my own and bought a model of the “Mighty Mo” for one of my brothers- in-law. While traveling the USA I was lucky to have had a chance to take a real look at such a battlewagon. We stopped in Mobile, Alabama and visited the USS ALABAMA (BB-60). The day Mount St. Helens erupted in 1980 we were on a vacation trip in San Diego and spent the day playing on the beach with our son. I had time enough to watch the naval base across the bay and I still remember the USS RANGER (CV-61) being in port.

Having bought my first naval cover I pretty soon had the idea to look for more covers keeping our memories fresh of the great times we had in the USA. Thinking in geographic dimensions I started with USS AMERICA, USS TEXAS and USS EL PASO. Looks like only a few ships – but it was only the beginning. I added the IOWA-Class battleships to my list, because they were the last to survive in service and did see action long time after WW II. Also the first large units and the backbone of our post-war German Navy: the six FLETCHER-Class destroyers transferred by the US Navy to Germany between 1958 and 1960. The last one was in service until 1982. I guess being a birdwatcher was a “mistake”, when I saw the USS KINGFISHER (AM-14) Schlechter bird cover and started to collect the LAPWING-Class minesweepers. A great challenge for a beginner, when I realized, that 49 of them were built. Not all of them had a post office. In that case it’s good to know an USCS expert like Alvin Eckert, who will prepare a commemorative cover for you. If possible I also try to find folders, picture postcards or sailor’s mail with content. The messages are very interesting to read and add a lot to the item.

While studying the covers I always have a point of interest to start looking for more information about the world we live in (learning by collecting), especially using today’s sources you can reach by the World Wide Web. I’m sure it will keep me busy after my retirement (at the latest) in 2015. Good to know, that a new USS AMERICA (LHA-6) will be in service by that time.

When looking for my first covers from the USS TEXAS (BB-35) I recognized a German eBay-seller who makes very precise descriptions including the Locy-type (which seemed to me like algebra). I contacted him and asked for more information about the postal service onboard the ships of the US Navy. Through him I met USCS member Kay Neuthor from Kiel, Germany. He mailed me the German version of the Type Chart of U.S. Naval Postmarks and the link to the USCS web page. Kay’s information pushed me to keep going with my new hobby and convinced me to join the USCS. Receiving the membership packet I was glad to find a helpful address in El Paso, TX making it easier for me to get in contact: Jim Dobbins, present USCS Vice President who helped when I started making my auction bids in the USA. It’s always a pleasure to stay in contact with him and get some news from El Paso and – of course – trading covers. One of my favorite covers was cancelled by USS WOODCOCK (AM-14) on 25 September 1938 and has a nice cachet commemorating the discovering of the Pacific Ocean by Vasco Nunez De Balboa (425th Anniversary). When you take a closer look you’ll recognize a little heart in the lower right corner. I guess it’s the sign of the cachet maker C. Murray Hart, but I also feel it symbolizes having lost my heart to a wonderful new hobby.

My wife Monika has already retired from her job as a kindergarten teacher in 2009. We enjoy hiking in the surrounding hills and forests on the weekends and make relaxing tours by bicycle through the plantations and fields in the vicinity of Meckenheim. I also enjoy going to the theatre, historical places and exhibitions, reading books (non-fiction) or doing some work around our house.