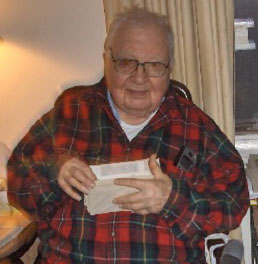 I am now 96 years old and I joined the USCS in 1934. In 1927, our family was living in Buffalo, NY and I was helping my father, Harry E. Klotzbach, send for Naval Covers. During the depression years, we needed a way to expand the family income from my father’s printing business. We would enclose five five-inch covers in a 6¾ envelope and send them to a ship. We could send five covers for 2 cents. My sister, Elsa, assisted us in stuffing and preparing the envelopes. My father also printed and sold albums that would hold 200 naval ship covers. The album, without covers, sold for $3 postpaid. With 200 covers mounted in the album the price was $10. That was depression pricing!

I remember Jesse Burgess Thomas, who lived in Georgetown, MA, visiting with us in Buffalo. I also remember my father attending many of the early USCS conventions. My father also began a correspondence with Dr. Locy in 1929.

After graduating from high school in 1934, I started selling stamps and covers in order to have money to buy food. I also started mail auctions of naval, seapost and merchant marine covers: There were four mail auctions total. Another first, in 1934, was my father’s printing of bi-color cachets for the 1934 US Fleet Review. This project involved 15 covers for each of the 101 ships that participated.

In 1937, I began employment at the International Harvester Company in Buffalo. In 1942, International Harvester encouraged its employees to seek defense jobs. I started work for the 3 rd Naval District as a Cost Inspector for the conversion of the Great Lakes Passenger paddlewheel steamer Greater Buffalo to the aircraft carrier USS Sable (IX-81). Many of the pre-commissioning crew for the USS Sable were survivors from the USS Lexington (CV-2). The USS Sable was the carrier upon which President George H. W. Bush completed his qualification.

Army induction followed on July 31, 1942, at Fort Niagara, and in March 1943, I started Army Administrative Officer’s Candidate School at Grennell College, IA. After graduation and commissioning as a 2nd Lt., I was posted to Dyersburg Army Air Corps Airfield, TN, a B-17 combat crew-training base.

I married Jean in June 1944 in a church in Buffalo. Jean was a collector and had been one of my customers. After Dyersburg Army Airfield was closed in 1945, I was transferred to Langley Army Air Corps Airfield (later Langley Air Force Base) in Virginia. At this time, there were many ships arriving in Norfolk for decommissioning and that provided a source for many naval cancels. Both my wife Jean and I were involved in sending for these cancels.

Following WWII, I was discharged. I went back to International Harvester in Buffalo and started collecting again.

I remained at International Harvester until entering Civil Service in February 1946 as a Supervisory Accountant at Mitchell Field in New York. Our daughter, Karen, was born at Mitchell Field. Karen has an MS in Special Ed and is now an independent investor. That was a short assignment because later in 1948, due to the build up of forces for the Berlin Airlift, I was recalled to active duty as a Captain in the US Air Force. Following graduation from a USAF technical school at Tyndall AFB in April 1950, I was transferred to Japan as a Management Analyst Officer at Tachikawa, AFB. Two months later, the Korean War began and I was transferred to the 374 th Troop Carrier Wing and shortly thereafter to the 315 th Air Division at Fuchu AFB as an Operations Analyst for the Korean Airlift. In 1952, while at Fuchu, I was promoted to Major (As an aside, Fuchu was where the American B-25 crews who landed in Japan in1942 were executed. Also during WWII, Fuchu was where the Japanese made the potato alcohol that was used as fuel for Kamikaze aircraft).

My next assignment was the University of Missouri to complete a Bachelor’s Degree, beginning in June 1953. Our daughter, Kay, was born while we were at the University of Missouri. Kay is now a Professor of Art at Camden County College in NJ. This assignment was followed by a tour as an AFROTC instructor at Washington University in St Louis. While at Washington University, I enrolled in their first MBA program and attended classes on evenings and weekends. I received my MBA in June 1956.

Next came an assignment to Loring AFB, ME, as the Resident Auditor. Loring was a SAC B-52 base and the nearest US AFB to selected targets in Russia. Crews could make non-stop flights to Russia and recover in Europe. Our son, Mark, was born while we were stationed at Loring AFB. Mark is now a Vice-President of PNC Bank in Baltimore.

From 1958 to 1961, I was stationed in London, England, as the Branch Manager for the Headquarters USAF Auditor General Branch. We had responsibility for Internal and Contract Audits. Following this assignment, I was transferred to the Pentagon.

In 1961, I began my tour in the Pentagon as a Senior Program Officer in the Auditor General’s office. I was selected for promotion to Lt Colonel while stationed in the Pentagon and promoted to Colonel in the reserves in October of 1964.

One of the great things about being stationed in the Pentagon was the opportunity to join the USCS Admiral Byrd Chapter and renew my acquaintance with Jessie Burgess Thomas. Jesse was working at the Navy Historical Office at the Washington Navy yard and writing ship’s histories for the Dictionary of American of Naval Fighting Ships. I also remember Dr. Forrest Swisher, MD, another member of the Byrd Chapter. Dr. Swisher served the Byrd Chapter as the convention chairman for at least two conventions. Gene Peterson, who collected seapost covers, was also a very active member of the chapter. Tom Nichols, Ken Hanson, Herb Rommel and Bill Lawton were other active Admiral Byrd Chapter members.

A highlight of my time with the Admiral Byrd Chapter was the First Day ceremony for the 4-cent non-profit envelope (Scott number U549) featuring Old Ironsides. The official ceremony was held in the Post Master General’s Office. That evening an invitation only reception was held in the Decatur House. Those invited included the Assistant Secretary of the Navy, naval attaches from friendly nations, Admiral Byrd Chapter members and their families and friends. Herb Rommel was primarily responsible for securing the Decatur House. At the time, Herb was the Commandant of the Naval Facility Anacostia. I served as the Chapter Publicity Chairman for the event and we had to find a way to pay for the use of the Decatur House. The 4-cent non-profit envelope was the first envelope produced on a new contract after the expiration of a 30-year US Post Office contract for envelopes. I contacted the new envelope company’s public relations officer and solicited a donation for the ceremony. After answering questions like, “What is a First Day Cover/ceremony?” the donation was secured. This started something with the envelope company who sent out a nice two color cachet to their customers. Following this event, the company continued to send out First Day Covers. There were also many press articles about the reception.

After retiring from the Air Force in 1967 with the rank of Colonel, I went to work for civil service as the Supervising Auditor for the Bureau of Public Roads, the Department of State Aid Program and the Environmental Protection Agency. I retired from government service in 1976.

Following government service, I was the Director of Finance for Modern Systems Inc., Ellicott City, MD, until my final retirement in November 1992.

While working in Washington, DC, we lived in Arlington, VA, until 1969, when we moved to Columbia, MD. At one time I attempted to form a Maryland Chapter of the USCS to be called the USS Frigate Constellation Chapter. Bill Lawton brought Bob Rawlins and Bob’s son and wife to the organizational meeting. Those who attended the organizational meeting were all members of the Admiral Byrd Chapter and it was obvious that the Maryland Chapter would only steal membership from the Admiral Byrd Chapter, so the effort was abandoned.

I love all naval covers. Next to the 4-cent non-profit envelope my favorite cover is one from the Prinz Eugen. I saw an article in the newspaper about the transfer of the Prinz Eugen from the German Navy to the US Navy. The Prinz Eugen was in Philadelphia and the German crew was still aboard. She was to be used as a target ship at the Bikini Atoll A-bomb test. The cover was posted and returned to me with two German ship’s markings.

I have never been an exhibitor, but I did some writing. In 1934, I ghost wrote articles about naval and marine postmarks for Stamps Magazine using my father’s name. I also wrote short articles for the APS about naval covers and a review about DANFS for Linn’s. The Klotzbachs had a standing ad in the lower left corner on the inside cover page of Stamps Magazine. When the Klotzbachs gave up that space, Herman Herst took it over.

Covers addressed to me will bear the address of L. Eugene Klotzbach or Lewis C. Klotzbach. My mother liked the name Eugene and I used that name until entering the Army. 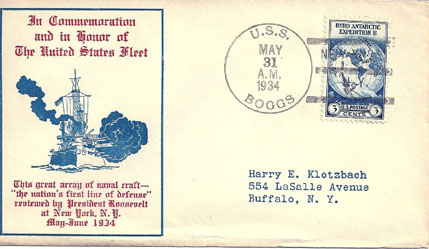