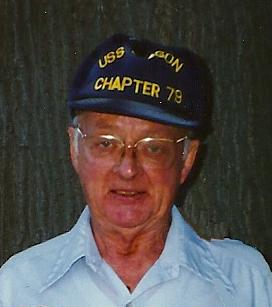 On April 16th I received an email from a former USCS member who had sixty naval covers he wanted to send me free of charge. The former member had found me on the USCS web site and I assume he chose me to give the covers to because we live within twenty-five miles of each other. When the covers arrived, the contents included a welcome to the USCS letter dated 16 September 1998 received by the former member from John Wager who at the time was president of the local USS OREGON Chapter #79.

After reading John Wager’s welcome letter, I realized John had written a great “member of the month” article almost fifteen years ago and that I had to share it. I never met John, but from a Google web search I learn he had worked as a engineer for the Southern Pacific Railroad and Burlington Northern Railway. John was born in the year 1916 and passed away on September 12, 2000. I have made a few word additions to John’s letter to assist the reader with locations (Example: Oregon)…Enjoy!

Welcome to the Universal Ship Cancellation Society. I am number 4106 and have been a member for over 35 years. I am also a member of the Oregon Chapter #79. We were organized in 1977 and meet three times in the spring and three times in the fall and have an annual picnic in July.

I enclose our meeting notice for the September meeting. It lists many of the 1998 covers the chapter has available. The Chapter Secretary Emil Cobos, also has a couple of hundred covers made over the past years.

I joined the former U.S. Lighthouse Service in late December of 1934 and reported to the tender HEMLOCK that was in drydock at Lake Union, Washington on January 1935. She was based in Ketchikan, Alaska and we served nine lighthouses and several hundred buoys and shore lights. In 1936 we made a trip out to Prince William Sound in the Gulf of Alaska to supply Cape St. Elias and Hinchinbrook Lighthouses and spent a day looking for a buoy that was reported adrift.

I left the HEMLOCK in April and wanted to get on a tender at Astoria, Oregon. I was there in early June to see an old shipmate who was on a tender there, and was offered a job on the RELIEF Lightship. I borrowed a suit of dungarees and a change of underwear from my friend, and the RELIEF sailed, to supply three lightships with water, mail, and supplies.

We left the first lightship COLUMBIA after dark, and headed up the coast. We arrived at UMATILLA Lightship at dawn and supplied her. En route to the SWIFTSURE I was called up to the bridge and the Captain gave me a message to transfer to the SWIFTSURE to relieve a Quartermaster who was ill.

There I was, stuck for six weeks, with only one change of clothes and 35-cents in cash to buy Bull Durham from the ship’s slop chest. When the tender came out to supply us, I drew $24 to get home from Seattle and at Vancouver, Washington I went to work for Fred Meyer when I ran out of cash.

I had an application with the railroad for a machinist apprentice, but my 21st birthday was the day before I left the SWIFTSURE and I was too old for an apprenticeship. After only a couple of days with Fred Meyer, a friend called me and said I could go to work on an extra gang that was laying new rail between Vancouver and Portland.

I manned a pick and shovel for two weeks in the hot sun, before a job opened up as a helper on a steam derrick. When the crew moved to build the new line around Bonneville Dam, I moved to the Vancouver roundhouse.

There I worked as a shop laborer, built fires in engines and cared for them, then on the road as a fireman, promoted to engineer, and worked to retirement in 1979.

I had collected stamps as a kid, and resumed to help a daughter in the early 1950’s when she got interested. She tired of the hobby and I took her collection over. I still collect worldwide, but have now narrowed it to the U.S., Canada, and Scandinavia.

I started to collect cancels and covers 40 years ago, and hate to throw anything away and have a bit of just about everything. Nothing real rare, but all are something that interested me.

When I retired, I promised myself that I would inventory my naval covers and count them and add new ones that came along. I now have 11,137 with the two covers that came today.

I started to put them in albums, but ran out of shelf space so I went back to my shoe box collection. I really should sort them out and add them to my file boxes.

I once thought of selling my covers and have a dealer interested. I also collect photos and cancels from post offices in Washington and exchange with other collectors so I have photos of post offices that I have never visited.

The meeting notice that I enclosed has the name, address, and phone number of our chapter secretary and I suggest you call him if you are interested in our group or any of the covers that he has available. He works part time but is usually home mornings and weekends.

He has catalogs and a lot of ship histories and I have found him a good source of information on history and covers.