When you are in your sixties today, you are still a relatively young person. But, I find that when you sit down to write about your life, you sure do feel old. The following musings relate to my collecting life and all the folks I met on the road along the way.

My collecting interests were stoked in my formative years. I recall my father collecting stamps. The hours he put into soaking stamps off paper, his stamp press (used to flatten stamps after they dried,) his home made stamp album pages (mimeographed) and his joy of swapping stamps with collectors around the world. He taught me about stamp collecting and gave me stamps and pages for my own collection. This blossomed into my purchasing Scott’s National albums in my mid teens. Sorry to say, I still have the albums and the thousands of stamps I collected, but I have not looked at them or collected stamps for over forty years. I still subscribe to Linn’s newspaper and maintain my membership in the APS, I suspect in case I return to the collection in those albums.

My first recollection of naval covers happened through the pages of Western Stamp Collector, a defunct stamp newspaper out of Oregon. (It was sold and became Stamp Collector but was recently taken over by Linn’s.) Western Stamp Collector favored cover collectors. Almost every issue contained articles on cover collecting. Many front page stories gave mailing instructions on sending covers to Navy and Coast Guard icebreakers going to the Arctic or the Antarctic. Other articles gave information on sending to DEW line camps, bases and flights. Others told you how to send to such places like floating ice islands with scientific stations (ARLIS I, II and Ice Island T-3.) These all caught my eye and I started with a collection of about fifty covers in a desk drawer. This was during my high school years.

In those days, Vietnam was in the news every day. Local newspapers carried stories of local sons in the Navy and which ships they were on. I started to write to the ships for their markings, and the drawer in my desk sort of got cramped. Writing to ships in the sixties was easy, since there were only two zip codes for ships, just 96601 for the Pacific Fleet and 09501 for the Atlantic Fleet! I was starved for information and was seeking other sources for ship cover information. I somehow found an issue of Our Navy magazine. In it, I noticed an article by ‘The Old Skipper’ Desmond Jagyi. He wrote a column about various ships, their cancels and cachets. Wow, news about covers. I immediately subscribed. Jagyi offered to send applications about a society that published the USCS Log. I wrote him, he sent me an application (he sponsored my membership) and I was on the way.

My collection grew and grew. From one, then two shoe boxes. Then four and next thing I new, I needed a new storage system. At an antique shop one day, I stumbled across a filing cabinet, manufactured to store file cards in, but they were on pages that lie flat, in slim drawers. Each cabinet had about ten drawers; I could put five covers in a page. This worked fine for awhile, until the pages began to thicken, and I could hardly close the drawers. So, back to the antique shops, and finally I owned six of these heavy storage files. The weight was due to the walls being filled with sand to make then fire resistant. Again, I ran out of space. I finally evolved into some albums for my favorite covers, and envelope boxes for the remainder, sorted into categories for ease of filing. (Categories such as Coast Guard, Navy, surface and submarines.) In later years many of these cardboard boxes have been replaced by clear vinyl boxes.

I was getting a little ahead of myself. Somewhere along the way, as a member of the USCS, meeting notices regularly arrived in my mail box, from this Decatur Chapter that met in a Philadelphia recreation center. The secretary of the group, Howard Neill, was persistent. After several years of getting notices, I finally arrived at one of the meetings. (Howard was a past national office holder in the USCS). Shy, intimidated and weary of the ‘big boys’ I was welcomed by those present. One stood out, the late Jim Russell, at the time the editor of the postmark catalog. Jim sort of took me under his wing and coached me in the art of collecting. He was also an exhibitor at USCS conventions and prodded me into attending the conventions of the USCS. Going to the national USCS conventions and east coast regionals, brought me into the company of a group of folks that were the back bone of the society. Where else could you meet the likes of Stan Honeyman, Dave Kent, John Milewski, Paul Huber, Bob Rawlins, Elaine Kozicki, John Gill and Ray St. John. I am not sure how it evolved, but it didn’t take long for me to become interested in the inner workings of the USCS and run as a board member in one of the elections. I don’t think I made it the first time, but what happened after that is history. Numerous years on the board, two terms as president and a stint as secretary and as treasurer of the USCS. I guess if the USCS had a favorite color, I would bleed that color.

With my association with the Decatur Chapter, someone mentioned that we should sponsor covers to bring revenues into the chapter. I’m not sure how, but I was anointed cachet director. I knew nothing about sponsoring covers. Looking back now, I must have done something right, since I have been sponsoring covers for the chapter for over thirty years. Some covers were done with rubber stamp markings, others were through the chapters cover service. Most were printed cachets. I figure that I have produced more then 1500 events totaling tens of thousands of covers. I have lost count. But when I purchase envelopes, I buy either 5,000 or 10,000 at a time. Producing the covers has brought me as much pleasure as collecting covers. At times, the cover producing has put my collection on the back burner. I currently have about 2,000 covers that need to be put into my collection.

My collection has grown by leaps and bounds over the years. I estimate that the collection consists of about 40,000 covers. Add to that the over 100,000 covers in the chapter stock, and you can easily see that a room of their own was important. On one of our antique jaunts, Peg and I purchased an oak wall, the interior wall of an actual post office lobby. The wall is a little more than that. It includes two customer windows, and behind the wall, the desk used by the post office clerk to accept mail and packages and the drawers and cabinets in which they stored their stocks and placed your money. After purchasing “the wall” it sat on my front porch for almost a year, until I removed a plaster and lath wall in my second floor, to install my post office. Behind is you will see all the chapter covers and my collection. When folks see it for the first time, they think I must have filched a lot of mail during my days as a post office department worker.

Over the years, I have worked in several jobs that I enjoyed going to work at every day. My first full time job was with Sears, Roebuck & Co. I was in sales (paint and wallpaper, then men’s shoes). From there I went to the U S Post Office at Cheltenham, PA as a substitute clerk/carrier. From there to the Cheltenham Township Police Dept. where I retired as a detective sergeant after 34 years of service, two years ago. I’m currently a licensed realtor with a local Re/Max office. I also hold a federal security clearance and do investigative work for a private contractor doing background investigations for U S Government employees needing a security clearance.

If I have learned anything from all of this, my family comes first. I have four great sons, three Marines and one that did the ‘rat’ year at VMI. One is now a police officer, one is a Marine reservist, and one is a career Marine, serving in Afghanistan. My youngest works for a large insurance industry actuary firm. The Marines, who knew? I served in the U.S. Coast Guard Reserves in the sixties. I guess it was the ‘Semper’ part of Semper Paratus that got them. But, most importantly is Peggy, my wife of 38 years. I owe it all to her. She was the one who put up with the hobby, the time at the conventions and regionals, the time spent printing the thousands of covers. She is the real “member of the month.” A cover done by Budd Arrington in 1993 says it all “The heck with the Commissionings, I need a vacation”. Thank you Peggy! 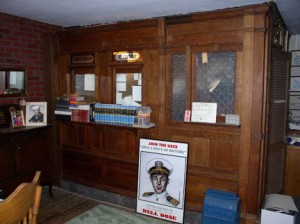 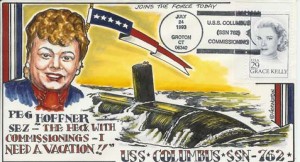