The United States Navy has been apart of my life since my first day in San Pedro, California in 1937, where my father was stationed aboard USS PENNSYLVANIA as a Chief Radioman (CRM). Later when the ship sailed to Hawaii, my mother and I followed to Pearl Harbor.

We were all there on December 7, 1941 and since PENNSYLVANIA was in dry dock that morning, my father was at home and not injured. Dependents were then ordered to the mainland unless they were involved directly in the war effort, so my mother took a job at the Pearl Harbor Naval Shipyard and we stayed in Hawaii throughout the war. My father was made a Warrant Officer and ordered to ADM Nimitz’s staff where he stayed until the late 1940’s. In the 1950’s, LT. Frank M. Hoak Jr. was taking a promotion physical for 0-4 when a problem was discovered and he passed away shortly thereafter.

During high school, I joined the Navy as an E-1 and progressed to Seaman (storekeeper striker) before graduating from San Jose State College and entering Officer Candidate School at Newport RI. In 1960, I was Commissioned as an Ensign in Naval Air Intelligence and ordered to the Naval Intelligence School in Washington DC where I graduated in 1961. My orders then were to Carrier Air Group 21 aboard USS LEXINGTON (CVA-16) as Assistant Air Intelligence Officer. The following year, I was ordered to ATTACK SQUADRON 216 as Air Intelligence Officer. The following year my squadron was ordered to the USS HANCOCK (CVA-19) and we did an additional cruise to Southeast Asia.

During the 1970s’ and 1980’s, I was in the active reserve at NAS Alameda, NAS North Island, NAS Belle Chase, LA., NAS Lakehurst NJ and NAS Willow Grove, Pa.

As a LCDR, I was recalled to active duty to Naval Hospital, Portsmouth, VA for OPERATION HOMECOMING to assist in the debriefing of the returning Navy POW’s from NorthVietnam. Released again to the active reserve, I became Commanding Officer of Fleet Intelligence Rapid Support Team 0593 in 1980 and was promoted to Captain in 1981. After 29 years of active and reserve Officer and Enlisted service, I retired in 1984.

My mother had been a stamp collector all her life and I understood the attraction of the hobby. In the 1960’s, I met Ray Costa, Jack Howland , Don McPherson and Everett Erle and became a member of the Saginaw Chapter where I made my first exhibit of Naval Type F (Fancy) cancels at a local stamp show.

In subsequent years, I was very fortunate to know many of the icons of USCS history. While living in Connecticut, I joined the Nathan Hale Chapter and was introduced to Ray St. John, Alex Hesse, Joe Hale, Stan Honeyman , Dave Kent and John Milewski, Sr.

Stan was a wonderful President of the Chapter for many years and came up with the idea of the USCS Data Sheets and asked me to write a few of the early ones on Pearl Harbor and Tokyo Bay.

During this same period I acquired the Navy Savings Bank collection from the Williams estate, and shortly thereafter started the FLAGSHIP auctions in the LOG, which ran intermittently for several decades.

When my reserve unit was moved from NAS Lakehurst, NJ to NAS Willow Grove, Pa. in the 1970’s, I attended some of the Decatur Chapter meetings usually held in suburban Philadelphia at Rich Hoffner’s home. It was there that I was fortunate to spend time with Jim Russell, one of the true masters of our hobby.

My primary civilian career was with the marketing division of Shell Oil Company, with whom I move seven times around the country in the 1960’s and 1970’s. My career was short circuited with my return to active duty for OPERATION HOMECOMING and I decided to go into the travel industry in 1977. The travel experience over the years has been indescribable, with my visit to Afghanistan and Iran this past year, I have now visited over 200 of the 315 countries in the world.

In the late 1970’s and early 1980’s I served the National Officer positions of Secretary/Treasurer, and Vice President culminating with the USCS Presidency in 1983-1985. For several years afterwards, I also served as a USCS Director. I was especially proud of the progress we made during my years as President. We had the highest membership number in USCS history (assisted by the one year free membership with 5 new recruited members), launched the Study Group concept and with Jackson Bosley’s guidance re-activated the dormant Sales Circuit program. It was also in 1985 that Bob Rawlins introduced the USCS Cachet catalog. Much of the time in my 6 years of national service was spent searching for a LOG editor and publisher.

With the Longseth’s last LOG publication in December 1980, (then) President Dave Kent and I convinced our good friend Stan Honeyman that he would be a great LOG Editor.

Stan did a wonderful job until mid-1984 when Dave and I were on the Editor search road again. This time we found Jim Klinger in Delaware. All of us in USCS have to be thankful when we have a stable Editor in place such as Bob Rawlins was for many years and Richard Jones is now.

As mentioned earlier, my exhibiting trials started with the Type F (fancy) cancel in the 1960’s, over the last 35 years or so I have exhibited Type 8 (Flag cancels); Four stack DD’s; Escort Carriers (CVE’s); Tokyo Bay; V-Boats; Battleships (BB’s) and the Covers of Francis Locy. (One of my favorite covers is shown with this article, it is a Type 1-u from Dr. Locy to his mother in 1920. It is especially meaningful as my father was part of the crew about 20 years later)

I have been fortunate to have won most of the major USCS named awards. In 1980, we established the Wings of Gold award for Naval Aviation related covers, and that was when I exhibited some of my CVE collection.

With the nurturing of one of my best friends in USCS, Jack Howland (who died at our 1990 annual convention in Columbia SC), I launched into Navy Postcard collecting, postcards were Jack’s favorite and we had great times talking about them. Jack was also the USCS Chapter historian and Postcard sales circuit manager. Today my collecting interests are somewhat limited to Navy Classics, Navy Memorabilia (including postcards), and anything Navy in Hawaii.

After selling my New York area based travel business in 2001, I married Leonore Kenefic Hoak and moved back to Hawaii where we live on a cattle ranch about one hour north of Kona on the big island of Hawaii.

Each day I am thankful for life and the ability to enjoy the world’s greatest hobby…. collecting Naval Covers!

Special thanks to USCS for all the great memories! 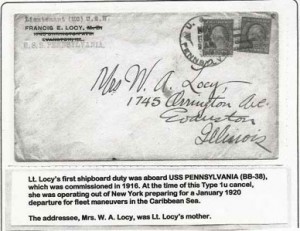