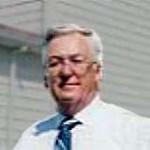 I joined the USCS in 1984 as a result of meeting Taze Nicholson at the 1984 VAPEX Stamp Show. He got me interested in Naval covers and I have been hooked ever since. I collect USMC covers and ship covers named after Marines. I also, collect USS Ranger CV-4 covers because of a personal connection to the ship. My father, Cpl. Leslie J. Hall, USMC, put the Ranger in commission as the first mail clerk. I started collecting stamps in 1939, when I got my first stamp album at the N. Y. World Fair—I still have it!

Besides my interest in philately, I am very active in my church and I help my wife, Jeannine, in her gardening hobby. She specializes in herbs, so I always have a long “honey do” list. Jeannine and I have been married for 28 years. She shares my interest in Naval covers and was very active in designing hand colored cachets until poor eyesight caused her to stop. I have 5 children and 9 grandchildren. The oldest grandson carried on the family tradition when he joined the Corps. He served in Iraq.

I graduated from Woodrow Wilson High School in Portsmouth, Virginia and promptly joined the USMC. I knew that was what I wanted to do when I was 8 years old. I was in the Marines for 22 years. I got into helicopters in 1956 and flew as a crewmember in the very earliest helicopters. I trained for about 10 years before going to Vietnam where I was a section leader with 6 H-34 helicopters and 18 men. I was awarded the Air Medal with a Number 11 for additional awards, Combat Action Ribbon, and the Purple Heart with one Gold Star for a second award. After Vietnam, I flew with the HMX-1 Squadron at Quantico, Virginia. My helicopter is now in the USMC Museum. From 1960 to 1966, I had “White House duty” where I was assigned to the Presidential Helicopter. This gave me an opportunity to get to know some of our national leaders and their families, up-close and personal.

I retired from USMC in 1976. I worked for the Navy Supply at the Norfolk Navy Base until we moved to this area where we enjoy 122 acres of rolling hills on the Banister River in Halifax County, Virginia.

I obtained some of my first Naval covers from my father. A few of these covers are from the USS Ranger CV-4. My favorite is a cover that was sent to a British Royal Marine by my father in 1940. The Brit was stationed in North Africa and was transferred all over the area. The cover finally caught up with him and by the time that my dad got it back, it was covered with forwarding marks and notes.

I really enjoy every aspect of designing Naval covers. The research work is fascinating and the comradeship developed with other collectors is very rewarding. It has been fun to introduce the hobby to local folk in this rural area. Local Postmasters have shown great enthusiasm and have from time to time, asked me to design a cancel for various events. I have created 107 designs since 1991 and the most recent one is as exciting as the first one. I have never exhibited. That is on my “to do” list.

I felt very honored when the USCS awarded me with the Crosby Award. In November, 2005, I was again honored when a story was written about me, as a military themed cachet designer in the “Leatherneck” magazine. This is a publication for US Marines and the occasion was the issue of the 4 Distinguished Marines stamps.

This nation has a wonderful heritage and it is great to be able to pass that down to the next generation through a hobby that has rewarded me through the years and one that I enjoy so much.