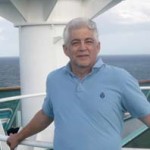 I was born a Navy brat on 4 February 1956 at Chelsea Naval Hospital, Massachusetts. My father MMC Antione Hebert retired in the early 1970s as a Chief Machinist Mate with 26 years of admirable service from the Korean War, Cuba Missile crisis and Vietnam, served mostly on destroyers and escorts. As a boy I was always fascinated with the awesome might of the US Navy and the magnificent site of mighty combatant ships at Newport, Rhode Island and Mayport, Florida. In high school I was able to get a job with a laundry service and every morning I looked forward to going of the ship’s fantails at Newport and have the watchman announce that the laundry service was on the fantail where I collected payment for cleaned laundry and picked-up dirty laundry. On one eventful day I was standing on the fantail, heard an alarm and was amazed at the site of a SAM dummy missile load onto its launcher in split seconds! Wow that sold me on joining the Navy! When I spoke with my father about joining the Navy he advised me to join another service believing that Navy life was not for me.

Upon graduation I entered the US Army in the last days of Vietnam and I served 3 years as an Operating Room Technician. With the new GI Bill benefits I decided to get out and pursue a college degree. I had been a stamp collector since I was a young child and during college I turned to a small mail order stamp business to augment my small GI Bill pay. Somehow I came across some 1970s ship covers from the USS America Chapter and I was fascinated with the whole idea of collecting ship covers and joined the USCS. It was at that time that I had the pleasure and honor to meet Commander Paul Huber who was a submarine officer at Portsmouth Naval Shipyard. Paul and I met many times to trade covers and talk about the hobby and to this day we keep in touch through emails.

During college I also attended my first Regional Coverfest around 1979 and met many USCS members. That was some 29 years ago and I vividly remember meeting many interesting, knowledgeable and friendly people. Most notably I remember Paul & Becky Huber, Rich Hoffner, Stan Honeyman, John Milewski, David Kent and Bob Rawlins. I thoroughly enjoyed the time spent with them talking about the hobby and the various sea stories I heard. I was awestruck by the amount of covers. At the event I really enjoyed the dinner and auction, late night trading and the show the next day.

During college I finally got my wish and joined the US Navy Reserves as a Hospital Corpsman attached to a Marine Rifle Company of the 4th Marine Division. In college I entered the US Air Force ROTC program and in my third year I was forced to get out of the Naval Reserves to fulfill my ROTC commitment. I graduated in May 1980 and was commissioned a second lieutenant in the Air Force. I served in Desert Storm as the medical supply officer at a 500 bed contingency hospital established at a WWII RAF base in England near Oxford. Shortly thereafter I decided to become a civilian.

You might ask since I served in the Army, Naval Reserves (attached to the Marines), and Air Force which one I liked best? I enjoyed them all but I have to say that I found being in the Navy Reserves while attached to the Marines as their “Doc” was the most exciting and fun; keep in mind I was young, adventurous and in shape!

I joined the USCS in 1977 and back then Chapters were larger, more prevalent and shipbuilding was at an all-time high with events almost weekly. Once I posted an ad in the log to buy covers and an older member wrote me telling me he was ready to sell his covers and would I be interested in buying them. He offered them to me at .15 – 25 cents each… I told him I was on a limited budget being in college and he stated, no problem I will send you small packets of 100 at a time. As the packets came in I was astounded at the quality of covers and amongst them were large numbers of original Crosby and Czubay Photo cachets and many better cachets. Well to make a long story short it was the buy of a lifetime and eventually most were passed on to other collectors when I disposed of my dealer’s stock. By the late 1980s I had accumulated over 100,000 Naval covers and First Day covers and upon becoming an officer in the Air Force I decided to sell off my dealer’s stock through Dutch Country Auctions in Delaware. I only wish I had kept them now as I had covers I can never replace including Gow Ngs, Czubay large photo cachets of submarines, and my favorite cover which was a #1 of only 2 made by Morris Beck which was a USS Thresher Commissioning cover signed by the CO and XO (one of which went down with her when she sank). The cover also came with a signed letter from Morris Beck proving only 2 were made. I wonder who was lucky enough to buy that cover in some auction lot?

In 1997 I became a full-time eBay seller and sold every imaginable thing except stamps and covers. After several years of selling antiques and collectibles I had this brilliant idea to list several wholesale lots of stamps from the Campbell Hall Stamp Company of New York City. I sold them without owning them and when I received payment I purchased them and forwarded them on to the lucky buyers. That sparked my interest in stamps and covers again. For several years I sold stamps and covers specializing in topical stamps and covers. Once again I found myself going to local stamp shows and auctions and accumulating a hoard of ship and submarine covers that I did not want to part with because of a renewed interest in the hobby.

In my early collecting years I wanted to produce my own covers but never could figure out a viable way if printing covers on a limited budget with limited resources; there was no internet nor personal computers back then. In 1980, I produced my first cover that was a memoriam and anniversary cover for the sunken submarine USS Thresher posted on the anniversary date of her loss. It was a simple rubber stamped cachet and I presented the envelopes to the postal clerk at Portsmouth NH post office and asked him to hand cancel the 20 or so covers I had done. I received some grief over that request but eventually I convinced him to hand cancel the covers with a circular date stamp. That was the last cover I ever serviced myself. Eventually I began to notice unusual and very attractive naval covers on eBay and after purchasing some I noticed that the cachets were added on by a computer printer. I began to buy any ship cancels on covers without cachets with the goal to do my own add-on cachets.

In 2003, I found that there was enough information on the internet to obtain ship’s data and images and eventually found a print program to design my own covers. I decided to standardize most of my cachets by including the ship’s name, hull number, ship’s data and the sharpest image of the ship. All of the covers I produce are marked on the back cachet added by MhCachets USCS 7913 with the number of cachets made if appropriate. I find that producing my own cachets is very educational, fun and yes exciting! I made an offer to USCS members to do add-ons cachets for them in exchange for blank ship cancel covers and I want to thank Paul Huber, Rich Hoffner and Stewart Milstein for the many covers that they have provided me to add cachets onto. I have since sold some through the USCS circuits but my passion is to make as many cachets as I can and worry about what to do with them later! It has become a passionate and educational hobby and I am glad to have met some very nice people in the society. I am always accepting covers from members for add-ons and please feel free to contact me at nhantikes@aol.com or Michael Hebert, 171 South Hall Street, Manchester, NH 03103. I take great pride in my cachets and feel they add to the hobby. I have included a couple examples of more recent cachets I added to event covers for Rich Hoffner.

I recently attended the 2008 Northeast Regional and although the event was not as big as the early 1980 Coverfest I attended, it was still fun to meet new people, trade stories and buy and sell covers. It was great to converse with old and new friends and I want to thank David Kent and the chapter for a fun event. Lastly I would like to reiterate that this is a great hobby that is educational, fun and exciting. The USCS has brought together many nice people with similar interests and I have met some lifelong friends that I will always cherish. The hobby is a tribute to our great Navy and Coast Guard and to all who have served and are serving now to defend and protect our great country. 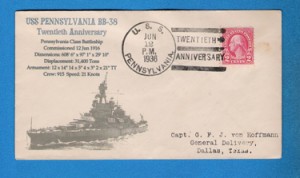 by Michael Herbert
Skip back to main navigation