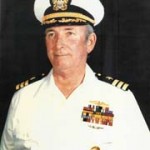 Alton M. Arrington aka Budd Arrington was educated at Girard College in Philadelphia PA. In WWII he served in the U S Navy aboard several submarines and was aboard for several war patrols. He was a “mustang”, first serving as an enlisted sailor, then as an officer. Budd did not talk much about the war exploits of the submarines he served aboard, but several lean stories he did reveal and left no doubt that a submarine was not equipped to take aboard survivors from Japanese vessels they sunk. Budd’s earliest artwork included cartoon style comics, about navy life in WWII.

Budd lived many years in New Jersey, was married at least twice and at one point in his life ran a yacht club near Barnegat, New Jersey. Examples of his artwork in those days included flyers for live entertainment at the bar and menus used at the club entryway.

His years living in New Jersey saw him active in the NLUS Atlantic City Council and he also did work for the U S Marine Corps League in Atlantic City. He was a regular visitor of local recruiting offices, both Navy and USMC in the South Jersey area, dropping by regularly with coffee and donuts. Additionally Budd was a life member of the Sub Vets of WWII and supported the USS Ling New Jersey Naval Museum in Hackensack, NJ. His artwork continued, with examples of posters for several Marine Corps Balls among his credits. When Budd moved to Pennsylvania his allegiance was to the Delaware Valley Chapter, Sub Vets of WWII and the USS Becuna in Philadelphia. Budd never missed a chance to pay tribute to a fellow “bubble head” who had completed his final cruise. Whenever he traveled, his “digger” hat and vest accompanied him.

Somewhere along the way, Budd discovered naval event covers, particularly submarine covers. Not one to be laid back, Budd tracked down the editors of “Our Navy” magazine in an effort to find members who collected naval covers. They referred him to Nathan Hale Chapter member and cachet director, John Milewski. Budd believed in going to the top, and John was a prolific promoter of submarine covers. He wanted to know more about the USCS and John pointed him toward the “local” chapter, Steven Decatur Chapter in the Delaware Valley (Philadelphia area). Next step was a call to Rich Hoffner, to find out when the next meeting was. At the first chapter meeting Budd attended, he was given the latest covers produced by the chapter. He looked at the cachets, and said in his typical heard around the world voice, you call these cachets? His abrupt comment took everyone by surprise and someone said if you can do better, do it. He did, and his artwork still appears on chapter covers to this day.

Budd really got into the hobby, and started collecting submarine covers without cachets. You would find him at USCS regional meetings and national conventions, routing through dealers and collectors boxes, picking up any cover or postal card he found without a cachet. He would then hand draw his own cachets onto the covers and cards. His work can’t be described in normal terms. His fantastic artwork can be seen in the Naval Cover Museum. It could be best described as surpassing anything that Gow Ng ever did. And that’s saying something. Some of his hand drawn covers were donated to conventions, where they sold for staggering prices whenever they showed up.

As the years rolled on, Budd became a care giver for his sister who suffered from Alzheimer’s disease. He brought her to chapter meetings and to conventions. He was a regular at my home, dropping in as often as once a week. He became family, and attended most family functions. To my kids, he was “Uncle Budd”.

When Budd passed away, relatives moved in, had a large dumpster delivered and started a “clean-out” of the home he and his sister lived in. I had made several calls to the house over a period of two weeks not knowing that he had died, with no answer. That was unlike Budd. On one of the calls, I left a callback number on the answering machine. I knew he did not need it, but something told me to do it. My call was returned by a daughter of Budd’s sister. She told me that Budd had passed away and they had to empty the house to sell it, and his “stuff” had to go. If there was anything I wanted, stop by and pick it up. To them it was just three rooms of junk to get rid of. I mention this, because the “stuff” was headed to the dumpster in the driveway. Books, covers, albums, all of his stuff was on the way to the dump. There is a lesson to be learned here. Tell someone about your collection and what you want done with it, before it ends up in the dumpster.

One of Budd’s proud achievements was his design for the Sub Vets of WWII memorial for the State of Delaware. His artwork adorns the granite memorial, in a memorial park in the shadow of the Delaware Memorial Bridge in New Castle DE.

Another of his achievements was his completion of a set of 52 covers for the Sub Losses of WWII he did for the chapter and the set (one of a kind) that was hand drawn of the boats. Additionally he designed a calendar for the Sub Vets of WWII featuring the covers as well as a set of post cards of the lost boats. The calendar was so successful, they did a second printing.

Budd and his sister volunteered one day a week at a senior retirement home near their residence in Drexel Hill PA. His artwork decorated many residents’ rooms. As he visited them, he would ask what they would like him to draw for them. A hippo, yes it was there, lions, yes as well as flowers done by him. I attended a memorial service held for Budd at the home. A large number of the residents came to the service, some in their beds wheeled in, some in wheel chairs, some on canes, some blind, some on oxygen, others with IV’s, but they all wanted to be there to say good bye to Budd. I was asked to say a few words, and did so. It was not an easy task and I almost broke down while giving a final salute to my friend, Budd Arrington. I noticed that his artwork had been temporarily moved from their rooms and was on display in the auditorium where the service was held. What a tribute to him and I am sure Budd was pleased. Budd lives on in his artwork. 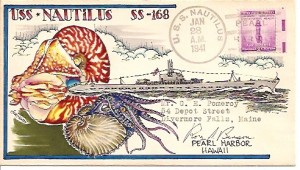