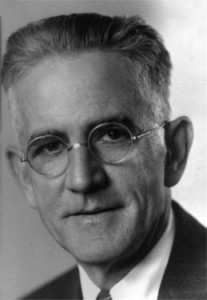 He was a newspaper man who wrote a financial column and was stamp editor for the Ohio State Journal in Columbus, OH when he became member #10 in September1932. Hall was born on September 13, 1889 in Sherman (Jackson City) West Virginia. He was once referred to as the “Dean of Navo-philatelic Writers”

In November 1933, Hall organized the Oliver Hazard Perry Chapter #5 with other members living in Columbus area. The chapter sponsored a program where mail clerks of several ships, e.g. PERRY, NORTHAMPTON, RICHMOND, QUAIL were adopted and it provided envelopes and postage to receive the society’s bulletin (now USCS Log). These mail clerks became associate members and the backbone of the rival ANCS in late 1930s.

Hall served as the society’s first vice president from April 1933 until April 1935. Hall ran against Deane Bartley in the 1935 election. It was a bitter campaign with position letters appearing in various publications; Bartley beat Hall by only 12 votes. It appears Hall and several Perry Chapter members (Whitlatch, Richell, Gilliland, Miller) started the rival American Ship Cancellation Society in April 1935, with Hall taking his old number ten. He resigned from the USCS in June 1935.

Hall served as ANCS president for only one term (1935-36), but he wrote about “Naval Cancels & Cachets” for the Navy orientation publication OUR NAVY beginning in 1938 or 1939 and continued until his death. Hall sponsored cachets for holidays and other historical events (1934-35) but he was against those who charged forwarding more than a penny, as he never charged a forwarding fee his covers. Hall ran the cover service until 1941, probably stopping because he was disposing of his duplicate covers – offering those paid-up ANCS members one dozen covers (free) for sending him one S.A.S.E with six cents postage (March 1941, Navigator)

For more on Marshall Hall, see my article “Navophilatelist of Yesterday” in the June 2002 Log. Hall passed away on April 9, 1947 and is buried at the Green Lawn Cemetery, Columbus OH. Hall was elected to the USCS Hall of Fame in 2003.