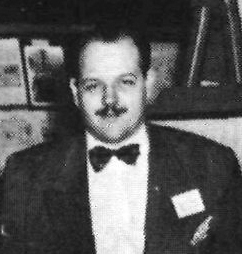 As any USCS exhibitor will tell you, the Anthony Fernandez Award is the top honor that USCS awards its exhibitors, the Grand Award. As the recipient of this award at the 2009 USCS Convention, once again a named USCS award made me curious about who the man behind the award name was.

Andy (as he was known) was born in 1922 and was a collector during his youth. He graduated from Temple University in 1945 and from John Marshall Law School in 1949 and he became a practicing attorney. He was born in and lived in Philadelphia when he joined the USCS in 1936, recruited by Meyer Tuchinsky (#832). Later in life he moved to Camden, New Jersey where he practiced law until his early death August 3, 1962 at the age of 40. He was survived by his wife, 2 sons and 2 daughters. His brother in law was Jim Russell (#692).

Andy joined the Stephen Decatur Chapter #4 in Philadelphia and was the Chapter President in 1938, Secretary-Treasurer in 1940 and the Chapter USCS Council Representative in 1941. Meetings were sometimes held at his house, presumably hosted by his parents! He must have really enjoyed the hobby and USCS as he ran for a Director position in 1941 though he lost but ran again and was elected for the 1943-44 term, a post he held until 1947. He joined the Postmark Classification Committee in 1947 and was on the Committee until his death. He was elected to the position of 2nd Vice President for the 1952-1953 term, Vice President for the 1953-1955 term and then to the Presidency for the 1955-1957 term.

In 1952 Andy was one of the members that contributed material to a naval cover exhibit at the Smithsonian. The exhibit had 6 ship models and had photos and covers for those ships. His interest in Postmark Classifications eventually led to him assuming the lead on updating the Postmark Catalog in May 1952 after Joseph Frayne who was leading the project passed away. This update would become the 4 th Edition of the Catalog and the first undertaken by the Society after taking over publishing the Catalog from F. Fritz Billig and was not completed until the late 1960’s, filling in ships beginning with letters J – Z as the Billig publications ended at letter J.

While serving as President, Secretary-Treasurer Sydney Fingerhood (#2549) fell ill in 1956 and was hospitalized and Andy assumed the Secretarial duties also. After his term as President, Andy once again served as a Director, 1957-1961.

Andy must have had quite a collection. His obituary in the Log stated that his collection was “ranking just behind that of Dean(e) Bartley” and that it was “the fruit of much study and research.”

Andy received an honorary USCS membership after his death, placing the “H” in front of his membership number. Ed Brennecke (#H-122) titled and donated the Anthony Fernandez award that would be given as the Grand Award for the exhibitor at conventions. It was first given at the USCS Convention held in San Francisco in 1967.