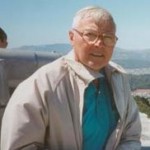 I became a collector of Naval covers while I was a general stamp collector going back to 1929; but it might have been earlier than 1935. My big problem is that I disposed of most of my covers a couple of years ago, including all those earlier ones.

Somewhere I have a copy of the letter from the person who recruited me. (Editor: John J Walsh, USCS #610) He had a column in the Western Stamp Collector and talked about getting covers from Asiatic Ports. He sent me information about the USCS and sponsored me for membership. I went to work sending away for them as fast as my finances would allow, maybe two a week. Ed Brennecke got on my case and tried to enlist me in the Moffett Chapter. He did not know my age and I wouldn’t tell him. I would say my other hobby was the Boy Scouts, joining the Scouts shortly after I joined the USCS. I got into the Scouts when someone wanted to borrow my stamps to show at a hobby show they were going to have. So I asked him why don’t I just join the Scouts and exhibit my collection. I have been a Scout and Scout leader ever since then and still have a membership card. I went thru the ranks becoming an Eagle Scout and Silver Beaver. After WW 2, my brother became the Scoutmaster and I was his Assistant. About 15 years later, my son joined the Scouts in the neighborhood where we were living at the time. I found out they weren’t getting any real Scouting so I jumped in and straightened them out. I still am on their list after receiving their 50 Year recognition.

When I was in the service in Cheltenham, England, (more about this later), I met my future wife there. She was in the British Army signal corps. We met in a service Canteen. We were engaged in 1945, and our papers were not processed in time, so once I was out of the service. I sent for Frances and we married in Chicago in 1946.

We have three children: Janet , married to Joe McGowan, they have two Sons, Joe married to Maggie with one son, Richard who is single and a teacher. We also have a daughter, Linda also single and son Robert and wife Janet with no children.

As a family enjoyed many vacations, and we covered all of the states, what with Army and USCS conventions, and went back to England to visit relatives. A number of Frances’ relatives also visited and wanted to see some places over here.

I was born in Chicago in the Englewood Area and lived within 10 miles of this area my whole life except for the four years I was in the army. I attended public schools, and graduated from Tilden Technical High School, with a one year scholarship to Chicago Technical College. Congressmen wouldn’t appointment me to Annapolis to get into the Navy. I finally found a job as a messenger- apprentice for a Printer, in the meantime the draft was instituted and my number was coming up, so I decided to wait it out.

I was drafted into the army for a YEAR, which ended up lasting four years and 15 days. The most popular song in those days was “Goodbye Little Darling, I’ll be Back in a Year”.

I was sent to Camp Wolters, Texas for 3 months basic training in the infantry. Just as we were finishing, they decided they needed Cadre more than they needed infantry so 50 members from each company were promoted to Corporals; 40 went to Camp Robinson Arkansas for infantry and 10 to Ft. Benjamin Harrison, Indiana. for the First Finance Training Battalion, which they were organizing in order to give basic training to Potential Officers and ranks.

In June we were shipped over seas to England, on the USAT Argentina, in overflowing and crowded conditions. We supposedly were on the first convoy of its kind and it was very disorganized.

We formed a headquarters Service Of Supply in Cheltenham, England and we were the Printing Unit of The Service of Supply and were based at Oakley Farm until we were moved to Rheims, France in 1944 until the end of the war. We were given two battle stars for our advanced position. For the move, with the help of the Engineers, we crated about one half of our equipment, we were leaving an operating plant behind to continue working until the plant in France was up and running. Some of the machines were small enough and all they need was to be fastened on large skids. The larger equipment was kept in as many large pieces as possible and then mounted with their power source. The idea was, all that would be necessary, was take the boxes off, plug them into their power and they would in business. As our scheduled date was arriving fast, it was decided that because the Germans had done “a proper job on the French ports”, we were going to have to go in “Over the Beaches”. Everyone who could drive, was recruited to drive the trucks, many of them 5 Ton and most had generator trailers etc. When the planned day arrived, we drove down to the port where they were loaded onto LSTs and LCTs and we made a nighttime crossing to France. We had some trouble unloading. They solved the problem by revving up the trucks going up the inside ramps at high speed which made for a thrilling ride.

We stopped in Paris for a few days. One morning, someone came running up to tell me to get ready to go with the group going to Rheims because my Sergeant had been injured. It turns out, he had been knocked off of a truck, and broken both wrists and both knees. From then on, I was in charge of all bindery work until I went home. We moved into an empty building and with a bit of hard work and were up and running. We were doing whatever was necessary to end a war, including copying the Surrender Treaty the night of the Surrender.

I was released from the Army on Halloween 1945 and on Tuesday went looking for a job. When I showed them the release information from the Army they said: “Can you start today?” and I worked there until I retired. I was as a Paper Cutter, Folding Machine Operator. I also had to help out the Bindery Girls and was in charge of the Paper Stock.

For my cover hobby, I was very much interested in Port Locations and Killer Bar slogans and made up list of Locations with the Latitude and Longitude which I looked up in various books and, maps. I gave the list to USCS for one of their publications but I’m afraid it is far out of date. (Editor: still available as Data Sheet #12.)

Probably my biggest interest was the USS Brooks and I had a very large collection; as I used to say I had every day and every date. Charles Olasky used to change many times a day on some dates with 1 to 4 cancels with changes in slogans and colors. I say, if you have 2 USS Brooks covers, study them carefully, they maybe different.

Killer Bar slogans were another big thing with me. Sometimes it took up to a year to find the meanings, because they had been put on the cover many years before. By talking to various members at conventions, I learned what some of the locations were. Once I learned that a location was where they used to anchor the Battleships before the harbor was deepened at one port.

Because of my age I have met many of the early people who formed the USCS back in the early 30’s.

My first Naval Cover was probably a Seattle Fleet Week Cover from 1935 that caused me to investigate the USCS and join.

As mentioned in the early part of this article my first exhibiting was done in about 1935 in the Boy Scouts and that caused me to join the USCS. Also about the same time, I put some covers in a hobby show downtown in conjunction with the Chicago Cover Club’s. I participated in a combined Hobby Show where we showed a number of old fashion large Picture Frames of Naval Covers. The Chicago Cover Club evolved into the Moffett Chapter, where we began to show in USCS events, and Conventions. The Moffett Chapter, like many others dissolved during WW 2. Several of us were still around an managed to bring it back to Life. (Editor: Larry served as the Secretary for many years. He is listed in the USCS Yearbook as Secretary in 1939, 1940, Secretary-Treasurer in 1946-1949.)

I was a director for about three years, (Editor: 1973-1974 and 1991-1992) but did not run for reelection because they passed a rule that the directors had to attend the convention and I could not guarantee that. I ran the auction in the Log but because we were not making enough money from it, they changed the Auction Director.

I have written quite a few bits for the Log but most of them were to help out someone who had asked a question about something which was in the log and I felt I knew the answer.

I think after the 25th Anniversary Convention in New London, I thought, this is for me and I should put obstacles aside to attend the Annual Conventions! I made most of them until my legs forced me to end all the standing, bending and etc. that comes with a stamp show. I exhibited at most of the shows, in my specialties such as USS Brooks, Locations, Slogans, Cancel Types, (took the Locy Trophy once, Best exhibit of covers based on the Locy system of cancel classification), Official’s, and demonstrated thru my mounting how to handle some weird type material. My only regret is that no matter how I tried, I never came up with Best in Show. There was always at least one Exhibit with better quality stuff. I always tried to show something out of the ordinary.

Exhibiting has changed and at times not too far back there were taboos, such as “It must be hand lettered, no typing.” I liked to mount my own frames because can you always add that bit of perfection.

One story I like to tell. At this show all of the mounting was done by the club. I made special diagrams of a group of covers, because, mounted my way they would show off the best part of some oversized covers; but the oversized would not be apparent. I came down in morning just as the Judges started their rounds. Yikes!! The crew had blown it. Fortunately the judges were a bit away from my frame, so I was lucky to find the show committee to get them to let me take apart the frame and rearrange them, properly and the exhibit came up with a Gold medal.