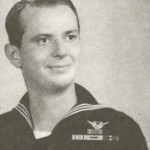 Richard “Dick” Ferris joined USCS in 1951 which puts him among the 15 lowest membership number members of our society. I approached him last year about doing a write up for the Member of the Month and he referred me to an article he had written for the May 1999 Log. My article pulls information from this article but for a real joy, read the original article to hear more details about Dick’s service life in the Navy during World War II.

Dick was born in May 4, 1922 and currently resides in Michigan. He’s a proud grandfather with 4 great-granddaughters. Unfortunately, today Dick has macular degeneration and it makes it difficult for him to read and more difficult to correspond. After his stint in the Navy, he spent 33 years in the US Postal Service. His hobbies include naval cover collecting as well as RPO (Railway Post Office) collecting and he has been a member for many years of the Maritime Postmark Society and has served as their auction manager for many years.

Dick joined the Navy in October 1942. After basic training at the Great Lakes Naval Training Center, he went to NATTC Jacksonville for Aviation Radio School. He learned radioman skills and also aviation radar but also suffered a broken ankle while in school. He went to NAS Daytona for flight training in squadron VSB-3. From there he was assigned to newly forming squadron VB-13, (Bombing Squadron 13), to be part of the air group forming for service aboard the USS Franklin, CV-13.

The squadron was formed in November 1943 using the SBD-5 Dauntless dive bomber and along with VF-13 and VT-13 was assigned to NAS Oceana. In December 1943 the squadron converted to the SB2C-1 Helldiver and in March 1944 the carrier and air group proceeded to Trinidad for training. In April the squadron converted to the SB2C-3 Helldiver, a version with 4 bladed props and 20mm cannon in the wings. Dick remembers his plane doing an air speed check along the coast near Kittyhawk, North Carolina when they were going so low they chased a Coast Guard jeep into the surf. They also circled the Wright Brothers Memorial so low that that they were looking up at it.

The Franklin sailed in May 1944 via he Panama Canal to the Pacific. On May 19 the air group flew from the carrier to land at NAS San Diego. A few weeks later they arrived at Pearl Harbor and flew into Ford Island. From Pearl, the carrier sailed into the war zone. The Navy wanted to get the cannon armed Helldiver into action so the stay at Pearl was only 8 days. In Dick’s article he describes an attack on Guam as well as some “unofficial requisitioning” of food delicacies, melons and chickens while on duty. The air group participated in strikes on Iwo Jima in September 1944. On the 20th, the Franklin crossed the equator and Dick incurred the rites performed on polliwogs. The following month, a typhoon hit the Task Group and the ship passed through the eye of the storm.

Dick’s skills as a typist “rewarded” him with duties typing up letters of commendation for medals; an original and ten onion skin copies that had to be letter perfect, no erasures or strikeovers. This before the days of the delete key and computers.

The air group struck Leyte in October and also Clark Field in Manila. On the 25 th of October Dick’s squadron attacked the battleship Nagato. On the 30th a kamikaze hit the ship, killing 56 and wounding 60. The Franklin proceeded to Puget Sound for repair where Dick received 30 days leave plus 9 days travel time to get to Norfolk. Dick later served in VB-93 on the USS Boxer, CV-21. He ended his service at NAS Mayport where he worked in the post office.