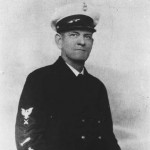 The term “Crosby Cover” is probably one that all naval cover collectors learn early into their collecting days. Crosby is well known to Air Mail collectors, as well as First Day Cover and Patriotic Cover collectors. Who was this man we who gave us all these wonderful covers? Walter Garfield Crosby was born in Santa Maria, California on November 2, 1881. Crosby enlisted in the Navy at age 17 on January 14, 1898. He served aboard USS MOHICAN as an Apprentice Boy 3 rd Class during the Spanish American War, carrying ammunition to Admiral Dewey’s fleet.

Crosby advanced through the ranks to become a Chief Gunners Mate during the next eight enlistments. He served aboard USS IOWA, USS MISSOURI, USS CHATTANOOGA and USS ALBERT (Submarine Base). Official records indicate Crosby was discharged as GM 3/c from USS MISSOURI (1 NOV 1906) and reenlisted as seaman in San Francisco (4 JUL 1908). A Hawaiian postcard with Crosby’s corner card indicates that he made the Great White Fleet cruise aboard the battleship. After transfer to the Fleet Naval Reserve, Chief Gunner’s Mate Crosby retired from the Navy in December 1925.

The photo of Crosby is one that he used for advertising his business. The uniform shows Crosby with his Chief Petty Officer stripes, with the Gunners Mate Specialty mark within the stripes. Below that is another Specialty Mark, Torpedoman, showing that he was also qualified in torpedoes and mines. Below that is the Distinguishing Mark for Seaman Gunner and below that, the crossed ropes worn by enlisted men who had passed through the rating of Apprentice.

It is said that he collected naval covers while in the service. After his retirement, he operated “Bones’ Place” at Front & Beacon Streets in San Pedro (1928). It was a bath house with all the modern conveniences (tailoring, cleaning & pressing), including 1000 lockers for the sailors to keep some of their belongings. His nickname “Bones” comes from his service days when he loved to shoot craps in his free time, “rattle the bones” as the saying goes. This location allowed him to meet mail clerks when their ships docked, as San Pedro was headquarters of the Pacific Fleet.

Crosby advertised a cover service in both the Western Stamp Collector (1928) and the Weekly Philatelic Gossip (1930). In the former, naval cover club members would send self-addressed envelopes franked with postage to Crosby and he would forward them to his mail clerk friends for cancellation. As a member of the Long Beach Stamp Club, he produced #10 cachet cover publicizing their first annual philatelic exhibit, his place of business and his store merchandise.

Crosby was very active in the new hobby of navo-philately. He began to service covers for sale to collectors i.e. Last Day Service, Last Day in Commission, First Day Service, First Day in Commission. Covers from TEXAS and PENNSYLVANIA transferring the Flag (15 SEP 1931) sold for fifty cents each. Crosby with Robert Beazell experimented with photographic paper folded into envelopes. They produced special battleship covers posted aboard the ships from various ports. A set of 16 sold for five dollars.

Visit www.uscs.org and under “Naval Exhibits” you will view some of Bones’ work in the M.M. Grey and the 1935 California Pacific International Exposition Exhibits.

His signature style of cover was started in May 1935. He used a specialized heat printing process known as “thermography’ which was done by sprinkling resin or wax powder on the wet ink and then heating the cover melting the material, resulting in a raised effect in the printing. Often a small paste on photo was added within the cachet design.

Crosby (USCS #69), sponsored by York Briddell, joined the newly formed USCS in March 1933. He would become a member of the Fighting Bob Evans Chapter #7 and was chapter’s cachet co-director along with Sarah Litton. He was Cachet Director of the San Pedro Chamber of Commerce (1933-34) and produced several cachets during “Old Ironsides” visit to the Los Angeles area. When USCS members split in March 1935, he became the twelfth member of the American Naval Cancellation Society. Crosby had run for Second Vice President on one ticket and Secretary-Treasurer on another ticket. He was listed on the USCS rosters through 1946 and served as USCS Director (1945-46).

Crosby was recognized by the Cachet Director’s Council as Registered Cachet Director #96 for navals and special events. He held covers (maximum of ten) and charged one cent per cover service charge, according to the 1939 USCS Yearbook

As early as 1931 Crosby was marketing the Crosby Album that would hold 800 covers. He was selling flight covers as early as 1930 and he was involved with flight or air mail covers until his death. His first First Day Cover (Scott #681) was produced in October 1929 and he continued these until his death in September 1947. Some FDC’s were cancelled aboard ship. Many of his covers had patriotic themes and he produced many such covers during the World War II years. Unserviced envelopes were purchased from him and can be seen with non-philatelic usage, sometimes from sailors to loved ones.

Crosby’s wife name was Emma. They had two children, a son Rewalt and daughter Jane. Crosby passed away September 28, 1947. He is buried in Inglewood Park Cemetery in California. His wife continued the business for a time with the help of Ralph “Shorty” Burkholder (#1336). Eventually, William “Duke” Gmahle (#2753) purchased the rights in 1949 to produce Crosby type covers (1949-57) Ray St. John purchased most of unused printed envelopes. Emil Bilka (#2670) also produced Crosby type covers (1947-52). You may distinguish “Bilka” covers from those produced by Crosby or Gmahle by the fact that “Bilka” coordinated the cachet color with the color of the stamp and often used a colored ink for the cancel.

Crosby’s influence on the hobby while catering to collectors cannot be overstated. In the 63 years since his death, his covers have continued to attract new collectors to the hobby. I can still remember finding my first Crosby cover over 25 years ago. I didn’t know what it was, but the neat little ship photo was great and that raised printing pretty fancy. It sure captured my interest.

The USCS recognized Crosby as one of the most influential persons for our hobby. He was one of the most imaginative and prolific cachet makers for nearly two decades and was inducted into the USCS Hall of Fame in 1996. Well done, Bones!