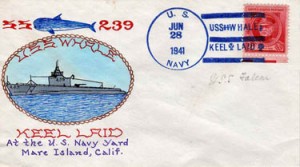 August 2007 Cover of the Month

This cover commemorates the keel laying of the submarine USS Whale. While submarines were once often named for fish, this one was named for a mammal that spends its life at sea. It may not be the most flattering of names for a sleek submarine but the men that crewed this sub during World War II made the submarine proud.

The Whale was built at the Mare Island Naval Shipyard at Vallejo, California. She was commissioned less than a year after the keel laying, with the ceremony on June 1, 1942. The Whale would earn 11 battle stars for her patrols during the war. Her very first patrol found her off the coast of Japan as the first American submarine to plant mines in Japan home waters. By the end of the war, Whale had a record of 9 ships sunk for a total of 57,700 tons. Most of these ships were cargo though one was an aircraft ferry. After the war the sub was decommissioned in January 1947, activated again for a short time in 1946 and recommissioned in January 1957 followed by her final decommissioning in September 1957 and then sold for scrap in New Orleans.

The Whale had a dog aboard as a mascot, coming aboard in September 1943 at the end of her fifth patrol while in Pearl Harbor. Her name was Betty, a white toy poodle. She was designated Dog First Class and given the run of the ship. She avoided the engine room and hid on the control room during gunnery practice. The sailors liked her as she was a “girl getter” and they would strike up conversations with the dog’s female admirers. On a return to Midway after one patrol, the port captain ordered the sub to remain outside the harbor until the weather conditions improved. The skipper did not want to remain as a target outside the harbor and came into port anyway. The angry port captain chewed out the skipper. Betty defended her skipper and ripped an 8″ tear in the captain’s pants leg. A subsequent admiral’s inquiry exonerated the Whale’s CO and determined that Betty was just defending her crew. The port captain was relieved.

This cover has a Type 3z cancel with no ship name. A pencil notation notes it was cancelled aboard the USS Falcon. ASR-2, a submarine rescue vessel. The cancel appears new and very crisp. As activity heated up prior to the United States entry into World War II, the Navy began issuing cancel devices without the ship name, instead they simply stated “US Navy”. This cancel was in use almost 6 months prior to the entry of the United States into World War II.

The beautiful cachet is the work of Gow C. Ng of Portsmouth, New Hampshire. Gow was USCS member 190 and ANCS member 160 and a member of the Freebooter Crew of the ANCS. Most of Gow’s cachets were hand drawn and mostly of submarines though he also did some covers for destroyers, cruisers, carriers, battleships and auxiliaries. His sub cachets are his most widely collected. They were drawn in pencil and then inked over with colored inks and watercolors. He had several different styles he used over the years between 1931 and 1945. The design on this USS Whale cover is my favorite, featuring a profile of the sub as well as a silhouette of a whale. The blue sky and water make this design particularly attractive. It is thought that he produced 100-125 cachets per submarine event. He sold them for prices between 10 and 25 cents in the 1938-1940 time frame. Today his covers are prized by collectors and a cover up for auction is bound to have spirited bidding.