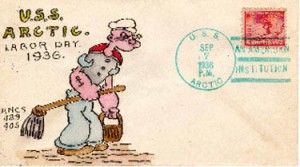 September 2007 Cover of the Month

This cover commemorates Labor Day 1936. Labor Day is celebrated in the United States on the first Monday of September and makes for the last 3 day weekend of the summer. Labor Day was created in 1882 as a holiday for the working man. Today it is recognized by all as a day of rest or play. The cachet features hard working Popeye the sailor man mopping the deck. Popeye is a character first appearing in a cartoon strip in 1929. He was fond of his corncob pipe and also spinach, known to give him his large biceps which he inevitably used while in competition with Bluto for Olive Oil. Popeye was the subject of a radio cartoon series, in fact the series began broadcast on the day before this cover was cancelled, on radio station WABC after moving over from the NBC network.

The cachet was drawn by two brothers, Douglas C. Wentz and Harry F. Wentz. The Wentz brothers were not USCS members but were ANCS members, (#429 and #405 respectively) and were members of the Freebooters Crew and Moundbuilders Crew #30. They drew and sponsored cachets between 1936 and 1939. In fact this cachet is probably one of their first. They prepared several designs for Labor Day 1936, hand drawn and thermographed and hand tinted. Most of their covers marked holiday events and other artists, including the wife of one of the brothers or the mother, drew some of the cachets. After the Labor Day 1936 series of covers, their later covers were printed versus hand drawn and were often cancelled aboard the “Bird” boats (minesweepers named for birds.)

The cover was cancelled aboard the USS Arctic. The postal clerk aboard ship often inserted slogans into the cancel killer bars on holidays to note the event. In this case, he noted the holiday was “An American Institution.” Other holidays in 1936 which were marked by holiday slogans aboard Arctic were Flag Day, St. Patrick’s Day, Valentine’s Day, Halloween, Columbus Day and Lincoln’s birthday.

The Arctic was originally built as the refrigerated cargo ship Yamhill in 1918. The US Navy acquired the ship in 1921 and renamed her Arctic and assigned the ship hull number AF-7. Most of her career was spent in Pacific waters, including time in Alaska waters. After World War II ended, Arctic carried food stores to Japan. She was decommissioned July 1946 and sold for scrap August 1947.