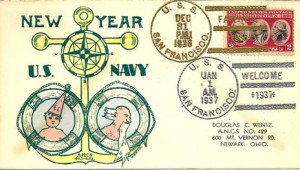 The Wentz Brothers and the postal clerk on the cruiser USS San Francisco had similar thoughts 75 years ago and they worked together to prepare this beautiful cover for New Years Eve 1936 and New Years Day 1937. The cachet is thermographed and hand colored and as an added treat, the cancels are also thermographed. Gold powder was used to mark New Years Eve 1936 with the killer bar slogan “Farewell/1936”. Silver powder was used for the New Years Day 1937 cancel with the killer bar slogan “Welcome/1937”.

The USS San Francisco was commissioned in 1934, built at the Mare Island shipyard in Vallejo, California. She would serve primarily along the west coast but she was also home ported at Norfolk and did make one cruise through the Strait of Magellan from the east coast, returning to the east coast via the Panama Canal. The San Francisco would be at Pearl Harbor on December 7, 1941 while undergoing an overhaul. During the war she sustained heavy damage off Guadalcanal on November 13, 1942. After repairs, she served in the Alaska Theater and in several areas of the Pacific. She was decommissioned in February 1946 and received 17 battle stars for her service during World War II.

This cachet was prepared by two brothers, Douglas and Harry Wentz, of Newark, Ohio. (ANCS #429 and #405). (They were ANCS members only, they never joined the USCS.) They prepared thermographed covers for a number of holidays during the period 1936-1938. They prepared some very attractive cachets, some of which were drawn by C.W. Richell and E.O. Tauer.