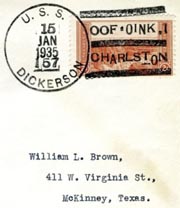 At first glance this cover without even a cachet appears ordinary in the extreme.  The Type 3(B-BBT) is common.  But then one is drawn to the
killer bars, and what is that?  OOF?  Oink I.?  Charleston misspelled?  This requires more exploration…and explanation.

So, out comes the trusty atlas…Oink Island?  Not there.  OK, let’s Google, Bing, Yahoo, and everything else that the web can offer…still no luck, no Oink Island anywhere, especially near Charleston.

Frustrated, we dig further.  So we turn to USCS resident Charleston ‘expert’ Bill Mitchell.  Bill has not heard of an Oink Island, and speculates that it may have been a sandbar that covered and uncovered at one time in the past, and 1935 was a long time ago.  The shifting sands of Charleston Harbor, coupled with Army Corps of Engineers dredging may have ‘removed’ Oink Island forever…or at least until the sands shift again.

Bill’s theory sounded good, but just to confirm his hypothesis, a check was made with the Charleston Harbor Pilot’s Association, and the USCG Captain of the Port office.  Neither harbor pilots nor the Coast Guard had ever heard of an Oink Island.

So, until Oink Island re-emerges, if ever, it shall be relegated to the postal history of  a small Navy ship, USS Dickerson DD-157, which apparently anchored near an ‘island’ in January 1935,  and had a ‘spelling challenged’ postal clerk in 1935…OOF must have been OFF, and clearly Charleston is misspelled.  The captain and/or crew of Dickerson must have named ‘their’ island…’Oink,’ maybe after the ship’s mascot, a pet pig named “Oink” (I made that part up!).