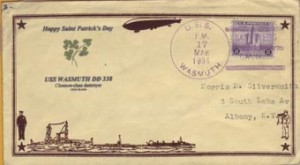 A Clemson-class destroyer commissioned in December 1921 and converted into a mine-sweeper destroyer (DMS 15) in November 1940. She was lost after explosion of two of her own depth charges during gale in the Aleutian Islands in December, 1942. She received a battle star for the Defense of Pearl Harbor on December 7, 1941.

Printed thermograph border envelope (Conrath Printery, Ripley NY) sent to the four-piper for cancellation by Lawrence Ayrault (USCS #24.) The reverse has a typed USCS #24 done by same typewriter, as the addressee, Morris Silversmith. Mail clerk canceled on 17 MAR 1934, while destroyer was in SAN DIEGO/ CALIF as indicated by wording in killer bars.

Conrath Printery was either Lawrence Ayrault or D.P. Christy, North Bay Stamp Club (A-203) & Int’l Postal Marking Society (306) as most early usage are addressed to both individuals. It appears they sold envelopes to members of both organizations.

No reference to Saint Patrick’s Day until computer add-on cachet (2012) done by Rich Hoffner (H# 4456) and sent to me for my Holiday collection.  Thanks, Rich!