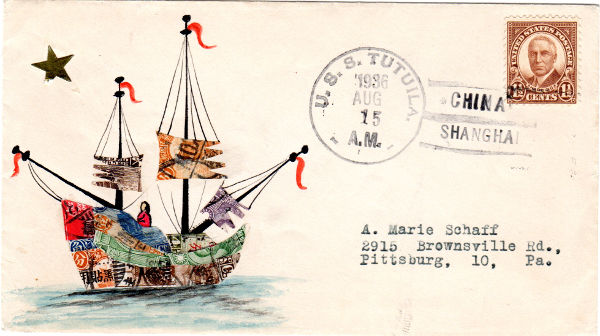 This cover has a collage cachet made of cut out Chinese postage stamps by A. Marie Schaff. The choice of stamps is appropriate because the river gunboat USS Tutuila was part of the Asiatic Fleet, in Shanghai, China when this cover was postmarked.

The USS Tutuila was built in China, launched in 1927 and commissioned March 2, 1928. She served in the Yangtze Patrol, showing the flag to protect American interests and lives.

In 1937 when the Sino-Japanese War broke out, Tutuila went far upstream to Chungking where she remained through 1941, unable to come downstream due to the Japanese forces.

When America entered the war in December 1941, she remained upstream. Her crew left the ship under the care of the Naval Attache. In January 1942 she was decommissioned and leased to the Chinese Navy. She served in the Chinese Nationalist Navy after World War II and eventually scuttled.