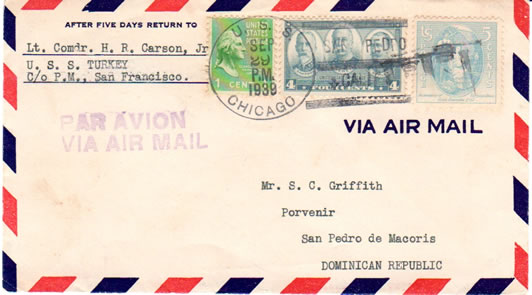 The minesweeper USS TURKEY was assigned to the Pacific Fleet based in San Pedro, California in September 1939. TURKEY was commissioned December 13, 1918, a little too late to see service during World War I but she did participate in the mine clearing operations in the North Sea after the war.

This cover was mailed from the commanding officer of the TURKEY, Lieutenant Commander Harry Roberts Carson, Jr on September 29, while at San Pedro. The cover was mailed to San Pedro de Macoris in the Dominican Republic. Sent via Air Mail, the cover would have traveled from Los Angeles to Miami, Florida. There, the cover would have flown on the route known as FAM 6, Foreign Contract Air Mail 6. FAM 6 originated in Miami and would fly via Cuba and Haiti to San Pedro de Macoris, on a Pan American Airlines flight. After landing at the San Pedro de Macoris airport, local delivery would have been made to the suburb of Porvenir and the recipient. The back stamp shows it arrived at the airport October 2.

The use of commemorative stamps as franking is somewhat unusual for an air mail letter. The 10¢ franking paid the correct air mail rate for up to ½ ounce.

Carson had become commanding officer of TURKEY only nine days before this letter was mailed. Interestingly, the cover is postmarked aboard the cruiser USS CHICAGO, Carson’s posting prior to taking over as CO on TURKEY. The minesweeper had a post office; perhaps Carson had not yet effectively transferred from CHICAGO at that point.

Carson would be CO of TURKEY until June 30 1941. During World War II, Commander Carson received the Legion of Merit for landing behind enemy lines on Guadalcanal to evacuate an Army platoon while under fire from both friendly and enemy forces. Captain Carson received a Gold Star in lieu of a Second Award of the Legion of Merit for his performance as Commander of LST Group 64 in the Southwest Pacific from November 1944 to July 1945. Carson retired as a Rear Admiral.