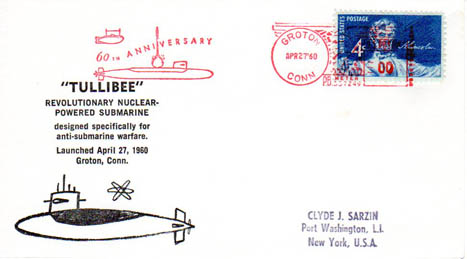 Cachet maker Clyde Sarzin prepared this launch cover for the USS Tullibee. Sarzin prepared submarine event covers in the 1960’s. He also prepared first day covers featuring metallic cachets that were pasted onto envelopes as well as space event covers. Naval covers were not his focus but his efforts resulted in covers for some early nuclear sub events such as this cover. Cover for the early nuclear sub launchings and commissionings are much harder to find than for later sub events when many USCS members and chapters sponsored covers.

The Tullibee was the second US Navy sub with that name, the first being built at Mare Island Naval Shipyard during World War II. She was lost in 1944 when one of her own torpedoes ran a circular course and sank herself. The second Tullibee was a nuclear attack sub. The keel was laid in 1958 with the launching on April 27, 1960. This Tullibee featured several new designs, including a bow mounted sonar array and amidships angled torpedo tubes, features to be built into following submarines. She also had a new very quiet propulsion system. She was commissioned November 9, 1960.

Tullibee served through 1986 and was inactivated in 1987 and subsequently decommissioned in 1988.

Tullibee received the Arleigh Burke Fleet Trophy in 1971 for significant improvement in the ship’s battle efficiency and readiness for that fiscal year.