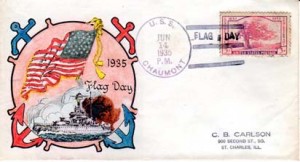 John Young has a very nice article in the June 2012 Log featuring Flag Day covers. There can never be too many Flag Day covers to look at, so I’ve chosen one of mine for the cover of the month. This cover was prepared by Oscar Hengstler (USCS #359). He made photo cachets on photographic paper, in the manner of Beazell and Crosby. While the basic design was printed onto the paper using the photographic process, it was then hand colored to provide this gorgeous cachet featuring a battleship and the flag for Flag Day 1935. Charles Carlson (USCS #732) must have been one of his subscribers as other Hengstler envelopes have his address on them.

This cover was cancelled aboard the USS Chaumont, AP-5. She was a Hog Island transport, originally to be a commercial ship, then taken over by the Army and then transferred to the Navy in 1921. During her naval career, she served in the Atlantic, Pacific and Caribbean. During the 1930’s, she spent time in Asian waters in China and the Philippines. In August 1943 she was decommissioned for conversion into a hospital ship. She was recommissioned in March 1946 as USS Samaritan, AH-10. She served in the Pacific Theater and took part in the invasions at Saipan, Iwo Jima and Okinawa and finished her service providing hospital facilities to occupation forces in Japan until March 1946. She was decommissioned in June 1946 and scrapped in 1948.

Covers from the ship are common but Hengstler cachets from any ship are not common and are always very attractive covers.

As John Young says, Remember to Fly the American Flag on Holidays.