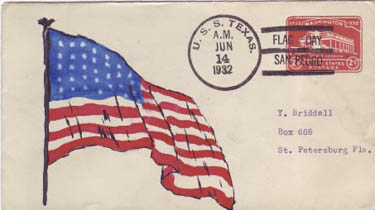 Back then, cover collectors were interested is obtaining with ship’s cancellation. Here mail clerk Kane placed wording FLAG DAY/ SAN PEDRO between the killer bars of a Type 5 cancel. This type cancel was in use aboard the ship from 1931 through 1939.

York Briddell was a big fan of cancels over cachet, as witnessed by most covers addressed. Almost all that I have seen are without cachet. Here someone (?) did an add-on drawing of the American flag in ink & watercolor. Nothing on reverse!

Battleship No. 35 was built at Newport News Shipbuilding Co., launched May 1912 and commissioned in March 1914. She saw service at Vera Cruz (1914) and was with British Grand Fleet during World War I (1918-19). Between the wars, USS TEXAS served with the Pacific Fleet (1920-37) before moving the Atlantic Squadron. She earned five battle stars (Normandy & Iwo Jima) during World War II.

TEXAS was decommissioned in April 1948. It is presently a museum vessel at the San Jacinto State Park in Houston where she sits in the mud.