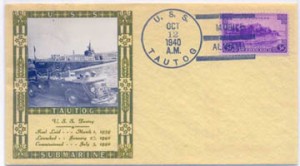 August 2005 Cover of the Month

This month’s cover was cancelled aboard the U.S.S. Tautog (SS-199) on Oct 12, 1940. The Tautog was launched on 27 January 1940 and commissioned on 3 July1940 at New London, Connecticut. Following a brief training period, Tautog got underway for the Caribbean on her shakedown cruise, which lasted from 6 September to 11 November 1941. This cover documents her visit to Mobile, Alabama during that shakedown cruise.

On December 7, 1941 Tautog was at the Pearl Harbor Submarine Base when the Japanese attacked. Tautog’s gun crew, with help from her sister ship USS Narwhal (SS-167) and a nearby destroyer, shot down a Japanese Kate torpedo bomber during the attack. Tautog began her first of what would prove to be 13 war patrols on the day following Christmas. She had a distinguished service record, receiving 14 battle stars and the Navy Unit commendation for her World War II service. Tautog was credited with sinking 26 Japanese ships with a combined tonnage of 72,606 tons.

This cover was produced by Louis C. Weigand and features a 2″ x 2″ photo of the Tautog at the New London submarine base. The photo was taken the day President Roosevelt toured the base and shows FDR seated on the right in the rear seat. There are 49 reported cachets in this series and they are highly sought after by collectors due to the high quality of their photos