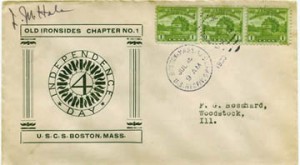 This cover brings some history to life. The cover was postmarked July 4, 1933 with the Type 6g-1 cancel from the US Receiving Ship at Boston, Massachusetts. At the time of the cancel, the USS Southery was serving as the Receiving Ship. The Southery was a steamer built in 1889 in England and purchased by the United States Navy in 1898 for conversion to a collier. Southery was commissioned the same year and began a career as a collier, a prison ship and later a station ship at Portsmouth, New Hampshire. Recruits were stationed aboard and trained there during World War I. Her duties then reverted to a prison ship and then became the receiving ship at Portsmouth in 1918 before being moved to Boston to assume those duties. Southery remained in commission while performing the receiving ship duties and was decommissioned just 8 days after this cover was postmarked, July 12, 1933. She was sold for scrap the following December.

The cachet on this cover is identified as being sponsored by the Old Ironsides Chapter of the USCS. The Old Ironsides Chapter was established just 5 months before this cover was postmarked, January 1933, and was the first USCS chapter to be established and today is the oldest active chapter. The USCS had been formed in September 1932 with the first Log being published in October. Within 5 months, this first chapter had been formed; the second chapter, John Paul Jones Chapter, being formed in June 1933. As of July 2005, there have been over 100 chapters assigned names though not all of them ever became fully active.

This cover has one more historical note. The corner signature is from Joseph M. Hale. Joseph, a member of the USCS Hall of Fame, was USCS member number 40. He prepared the first work to be published listing naval postmarks, the Handbook of Naval Postmarks, published in 1934. Joseph edited the handbook that was published by Hale and Everett Wallster. Hale published a second edition in 1939, with Charles Emerson, a version that even valued the different markings. Hale, John Gill and Joseph Frayne prepared the next publication after World War II, the New Catalog of Naval Postmarks and US Naval Postal History. Of course these publications were the foundation for what has today become the Catalog of United States Naval Postmarks, Fifth Edition, edited by Dave Kent.

Joseph Hale also helped the society when the officers of the society were called to military duty and left the USCS with no administration, publication or treasury. Hale had been a director in 1940-41, First Vice President 1941-1942. He became president in 1942 and he published the Log as a one page mimeographed newsletter, holding the society together during a difficult time for the country and for the society. (Recruiting fell to an all time low of only 19 new members in 1942.) Hale turned over the presidency to Bertha Thompson in 1943 and he served as a director again in 1946-47.

All this wealth of history from an unassuming $3 cover.