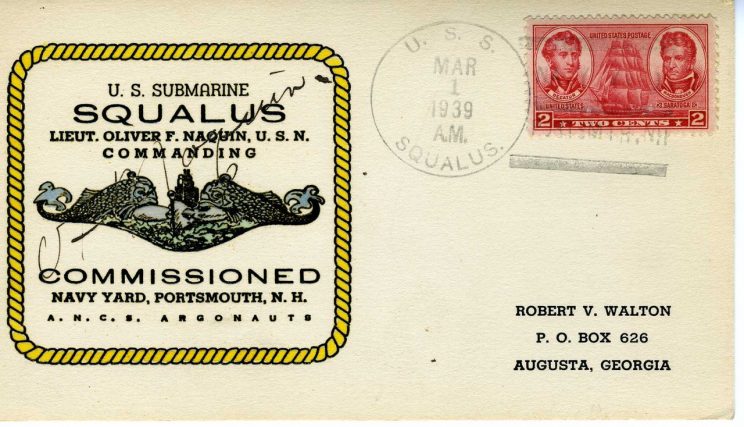 Perhaps the most famous U.S. Navy submarine peacetime disaster, mainly for the massive successful rescue effort after she sank off the Isle of Shoals on May 23rd, 1939. Commissioned in March 1939, SQUALUS was still being tested, and this day’s tests were viewed by the crew as routine. On her first dive, all indications on the control panel (commonly called ‘the Christmas Tree’ for its red and green indicator lights) showed that all hull openings were closed (a ‘green board’). Somehow, a false closed indication registered on the main induction valve…it was actually stuck open, and water rushed into the engine room. In the control room, Electrician’s Mate Third Class Lloyd Bronzia Maness, one of the most junior men in SQUALUS, was posted. His job, to stand by the watertight door between the control room and the after battery compartment and close it in an emergency. When the flooding started in the engine room, Maness probably should have immediately shut the door, and if he had he would not have been faulted. However, as he saw men rushing forward toward the door, his humanity and his submarine qualification program ‘kicked in.’ He knew that he had a few short seconds to spare, and he held the door open as five men dove through into the control room. But he also knew that time had run out and he reluctantly shut the door, knowing that he had likely just condemned a number of his shipmates to certain death. One of those men trapped aft was his best friend, Torpedoman First Class Sherman Luther Shirley. Shirley was to be married the next Sunday, with Maness as his best man. Because he knew his boat intimately, Maness’ actions saved 33 men, including the five who made it through the door guarded by Maness. His actions unfortunately sealed the fate of 26 of his shipmates. Maness had done what his training and submarine qualification program prepared him to do, he was a junior man acting on his own initiative, and all that recorded the event recognized him as a hero. Sadly, it was still a burden that Maness carried; he never spoke publicly about the incident. By November 8th, 1944, Maness was a chief electrician’s mate serving in USS GROWLER SS-215 when she was lost with all hands in the South China Sea.