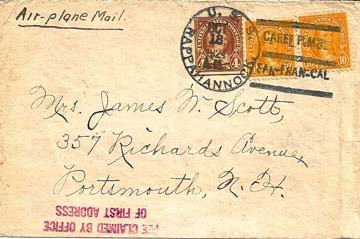 The USS Rappahannock was perhaps one of the less glamorous ships that served a vital support function to the fleet. She was originally launched in Germany 1913 as the SS Pommerin. She was interned in Hawaii after the outbreak of World War I and assigned to the US Navy by the US Shipping Board. She was delivered to the Navy December 7, 1917 and commissioned the following day as USS Rappahannock. She was then assigned to the Naval Overseas Transportation Service (NOTS) as an animal transport carrying horses, steers and mules to the American Expeditionary Forces in Europe with the designation NOTS-1854. She completed four transatlantic trips to France arriving on her last trip to France on November 16, 1918 just days after the armistice was signed.

She later transferred to the Atlantic Fleet in 1919 and completed one more round trip from New York to Europe before being assigned to reserve status in the summer of 1919. She was returned to active status with the designation AF-6 in January 1921 and she carried cargo for both the Atlantic and Pacific fleets. She was decommissioned December 10, 1924 and put into reserve at Mare Island until being struck from the Navy list in July 1933. She was sold to the Luckenbach Steamship Company where she served as the SS William Luckenbach through the end of World War II and was then sold to an Italian firm where she served through the end of the 1940’s.

This cover was posted when the Rappahannock was at Mare Island October 18, 1924, probably at the shipyard while being prepared for reserve status. The cancel is a Type 3s which has a R-2 Scarcity rating with 10-25 known copies. The return address on the reverse indicates the sender lived in the Gernard Apartments in Vallejo, where Mare Island is located.

What makes this cover particularly interesting is the early use of coast to coast air mail service for this letter. The coast to coast service had only begun on July 1, 1924 with the country split into 3 postal zones; New York to Chicago, Chicago to Cheyenne and Cheyenne to San Francisco. The postal rate was 8 cents per ounce per zone; a coast to coast mailing would cost 24 cents as shown on this cover. This cover, cancelled aboard ship on October 18 in the morning, was delivered into San Francisco in the afternoon as shown by a backstamp. The air mail plane would have departed San Francisco on the morning of October 19, traveling via Reno, Elko, Salt Lake City, Rock Springs, Cheyenne, North Platte, Omaha, Des Moines, Moline, Chicago, Bryan, Cleveland, Bellefonte and into New York City on the evening of October 20 32 hours later. From there ground transportation took the letter to Portsmouth, New Hampshire where it was received the morning of October 22 at 8 AM per the backstamp and then delivered to he recipient, probably that day or the following.

The cancel killer bar has an interesting slogan, “Care PM (Postmaster)/San Francisco CAL” and has a marking indicating that the air mail fee had been paid by the sender. Regulations required that the fee for at least one zone by paid by the sender (8 cents) but it was permissible to have the balance collected upon delivery. This marking made it clear that the recipient would not need to be charged as the sender had paid the full fee.

It’s interesting to think of the air mail pilots who flew night and day in their biplanes when this service was in it’s infancy. It is a pretty neat cover when the whole story is put together.