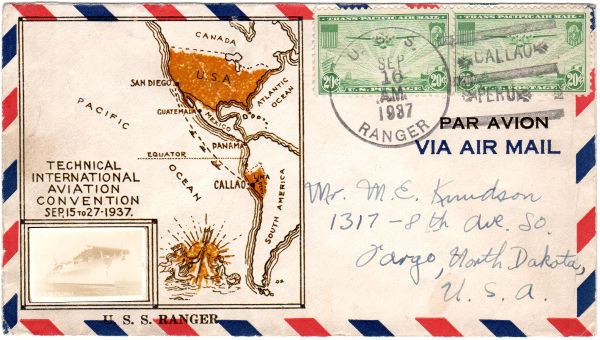 The USS Ranger, USS Worden and USS Hull all visited Callao, Peru at the time of the Technical International Aviation Convention being held September 15-27, 1937 in Callao. They arrived September 16 and the Ranger departed September 26, the two destroyers departed on the 27th.

The conference was held to create a Permanent American Aeronautical Commission (Comisión Aeronáutica Permanente Americana, CAPA.) The conference was attended by 12 nations in the western hemisphere, as well as Germany, Italy and Great Britain. The CAPA was to be composed of legal experts and technicians in aviation, designated by each government for periodic working sessions, with the aims of unifying and codifying the international, public and private, aeronautical rights, coordinating and developing mutual interests in technical matters, and organizing and marking the inter-American airways. While progress was made among the twelve nations, the CAPA was never formed.

Walter Crosby made this cover to mark the convention. Mailed aboard the Ranger, with the Crosby cover as commercial mail, 40¢ paid the proper air mail rate between Peru and the Continental United States, postmarked on the date of her arrival at Callao.