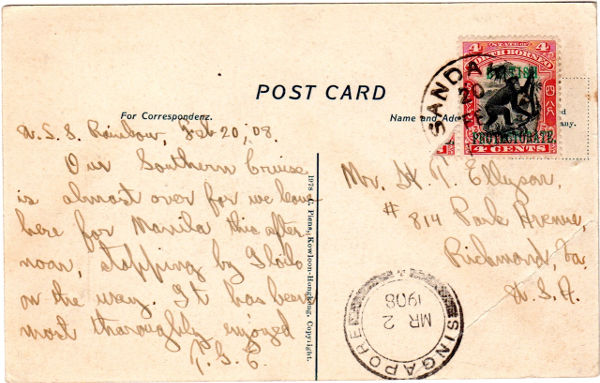 The USS Rainbow was built as a merchant ship, the Norse King, purchased by the US Navy in 1898 and fitted out as a distilling ship for service in Asia. Assigned to the Asiatic Fleet, she arrived at Cavite in the Philippines in April 1902. She became the flagship of the Philippine Squadron and made voyages to Hong Kong, Japan and Vladivostok.

In 1908 she became the flagship of the 3rd Squadron, Pacific Fleet and cruised between the Philippines, Japan and Southeast Asia. The card featured this month was posted in North Borneo February 20, 1908 while on a southern cruise in Southeast Asia.

In 1909 she would become tender to the First Torpedo Flotilla, still in Asiatic service. She later served as a transport, a receiving ship in San Francisco and in 1918 was then converted to a submarine tender. She served on the east coast for a couple of years and then returned to the Philippines in 1921. She continued her Asiatic service until 1924.

She decommissioned in Philadelphia July 1925 and was scrapped in 1928.