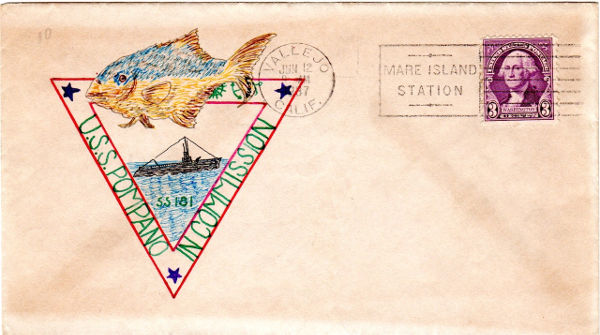 This hand painted cachet was drawn by Eugene Mueller for the commissioning of the submarine USS Pompano at Mare Island June 12, 1937. Mueller was USCS member #255 and he prepared covers for the Freebooter and Independence Crews of the ANCS. He made printed cachet covers but he also hand drew many covers, such as this one. His style is easily recognizable and while not as artistic or polished as Gow Ng covers, they are still attractive.

The Pompano made 7 war patrols during World War II with some successes. On her 7th patrol, she departed Midway Island August 20, 1943. She is credited with sinking three ships on the patrol but she never returned. She was probably sunk by depth charge attacks in September, in Japanese waters.