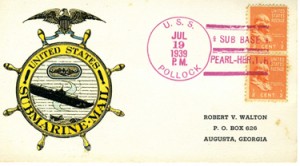 Occasionally we find a cancel that is a legitimate cancel that contains an error of some kind. The USS Carl Vinson has a Type 11 cancel which includes the hull identification of the ship as C UN-70 instead of C VN-70. There have been some misspellings of the ship name over the years, one being a cancel for USS Narwhal reading USS Harw ahl. Another was a Type 3 cancel for the submarine USS Poll ack featuring a misspelling of USS Poll ock. In each of these two cases, there were some covers cancelled with the incorrect cancel and in both cases they exist in a very small quantity.

Member Glenn Smith (#8073) received this month’s cover about 20 years ago from a distant cousin, the widowed wife of early member Robert Walton (#340). In researching the cover, Glenn corresponded with member Dave Kent (#H-5148) who shared this interesting history of the cancel:

“Despite the fact that he lived in Georgia, Bob Walton was clearly one of the “Brooklyn Gang of Cachetmakers.” I don’t know how the friendship ever developed, but from the write-up in the Cachetmakers Catalog Bob was the “idea” guy, the one who came up with the idea for a cachet. He would make a rough sketch and one of the skilled artists in the group (and there were many of them) would turn that into finished artwork. Alex Hesse (#H-163) was a professional printer (took over his dad’s print shop business), and he would have the cut made and printed the covers. I learned much of this in talking with Alex, who I knew quite well back in the 1970s. Most of the covers were printed on envelopes, but Alex would do a few (never more than 100) on Bristol card stock, because he felt, as a professional printer, that it made a sharper impression, and also took the thermograph process better. It also took water colors better, and Alex would take them home and he and his wife Colette would hand-color them from little bowls of watercolor spread across the kitchen table, the raised thermographed lines acting as little “dams” to keep the watercolors from running together. The hand-colored ones were limited to the members of the Argonauts and the Brooklyn gang.

I have considerable documentation on the POLLOCK error, including letters from Alex Hesse and notes from the mail clerk, Ed Oakes. It seems clear from the notes that Oakes realized it was an error from the time he received it, and deliberately made strikes of it just for himself and friends (oh, and for his CO). According to his report, the following received examples: Oakes (3), LT Seabring (2), Hesse (2), and the following one each: Walton, Martin Aden, Richard Buchwald and George Sadworth (#178) (that’s 11 total). I have one of the Oakes covers.

The final bit of trivia: if you are a fisherman you might spell the name of the fish with either an A or an O; both are considered correct. The Navy chose A, so that’s the only correct spelling for the boat.”

So, this accounts for 2 of the copies. Where are the other 9?