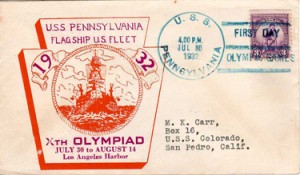 August brings the Olympics to Beijing, China with the opening of the XXIX Olympic Games on August 8. This reminds me of the 1932 Summer Olympics in Los Angeles when Navy ships at San Pedro and Long Beach harbors marked the event with cancels and covers.

Over 30 US Navy ships were present in the San Pedro and Long Beach harbors during the course of the games and some participated with slogan cancels and special cachets. Their participation actually started on July 15 with unofficial first day covers of the Olympic stamps, Scott number 718 and 719. On July 28 there was a mass maneuver and aerial review. On the opening day of July 15, at least 11 different ships had cancellations on that date. The USS Brooks even got into the act though she was anchored at San Diego. Some ships prepared cancels for most of the days of the games, some just for the opening or closing of the games.

This month’s cover shows the Walter Crosby cachet prepared and used aboard the US Fleet Flagship, USS Pennsylvania. The cancel is a Type 3 and has a slogan indicating the opening of the games. Pennsylvania would prepare slogans for all but the 9th day of the Olympics according to USCS Data Sheet 14, “Naval Covers and Cancels of the Xth Olympiad, 1932”. A similar cover was prepared for the closing date, August 14 with the same cachet and a rubber stamp reading “Last Day Xth Olympic/Games Aug. 14, 1932.” The ship cancel used was the same cancel with the slogan reading “Last Day/Olympic Games”.

I would not expect any US Navy ships to be present in Tianjin, China in August to provide similar cancels but it would make for some neat covers!