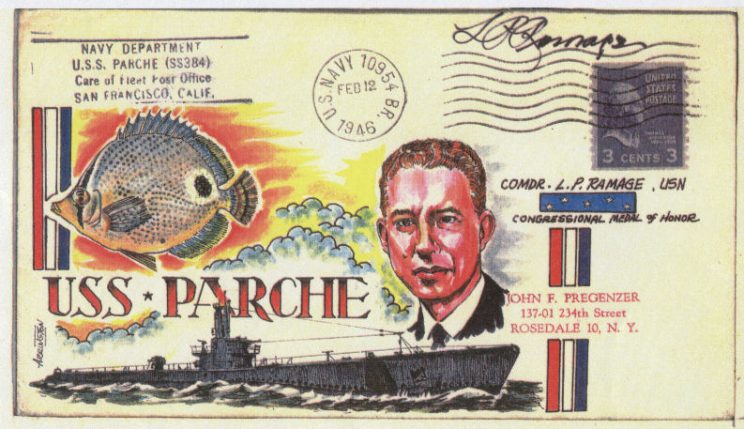 Being battle stations helmsman is an important position for a junior man in any Navy ship. Signalman Second Class Courtland Chester “Chet” Stanton had earned this task in PARCHE because of his rating plus an innate “sixth sense.” He had an eerie ability to anticipate what was coming next and was always ready to respond. This ability became critical on the night of July 31st, 1944, as PARCHE, under the command of CDR Lawson Patterson “Red” Ramage, stumbled into an enemy formation of ships. Deciding that he could destroy the most ships by attacking on the surface, Ramage charged through a tight and determined screen to get to his big, fat targets of freighters and tankers. In what would be perhaps the most intense 46-minutes of surface action by any WWII submarine, PARCHE went on a rampage (Ramage’s Rampage!) firing torpedoes left and right, fore and aft. In his fury at the enemy, Ramage, at one point, lost sight of all of the enemy ships, and one big freighter closed rapidly with the clear intent of ramming PARCHE. Chet Stanton, in the conning tower helm station positioned just below the bridge hatch, heard the junior officer-of-the-deck (JOOD), LT Ed Rauscher, exclaim, “Captain, we are going to be rammed!” Seconds later, Rauscher repeated his cry of alarm, this time louder. Stanton knew that his last order received was “all stop,” and he sensed that the skipper had forgotten that fact. Hearing the alarm cries of the JOOD, Chet Stanton rang up “all ahead flank.” Ramage, hearing this, shouted a confirmation of the order, and followed with “Give me all you got!” Observers later said that the freighter missed PARCHE by less than 50-feet. One observer said it was more like 50-inches! After the war, Torpedoman Second Class Raymond Karr said, “Stanton saved all of our lives that night.” Stanton was awarded a Navy Letter of Commendation with Medal. Skipper “Red” Ramage received the Medal of Honor for this night’s actions, and retired from naval service as a vice admiral. But this night reconfirmed the value of the submarine force’s qualification program, and how it enables junior submariners to be confident in taking action, without orders, if necessary.