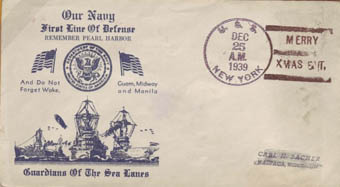 Interesting thermograph type 3 (A) cancel appeared on Crosby envelope and was probably used as experiment by a Brooklyn ANCS crew member. First the cachet documents “Our Navy” as the First Line of Defense, remembers Pearl Harbor (12/7/41) and to “Never Forget” the other battles in the Pacific that occurred in early 1942. Note: a postage stamp was hastily removed the cover and the ink colors of silver & gold used by the printer. A similar un-cacheted cover in collection is addressed to a C.E. Walton, Brecksville OH & has the same cancel 25 DEC 1939 with wording MERRY/ XMAS between killer bars.

Talk about gun-decking covers! It’s believed by this collector that this is the infamous fake NEW YORK cancel that was used by Mike Sanders and others on covers done after the battleship was decommissioned.

This 572 foot, 27,000 ton “Super Dreadnought” was launched on September 11, 1911, commissioned on April 14, 1914 and had a compliment of 1040 sailors and marines. She was deployed as Flagship, Admiral Frank Fletcher, commanding the fleet occupying and blockading Vera Cruz (Mexico) in 1914. She served as Flagship, Division 9 with British Grand Fleet during World War I and was earned 3 battle stars during World War II where she participating in the invasion of North Africa, Iwo Jima & Okinawa. She survived as a “target ship” at Bikini Atoll and was decommissioned on August 19, 1946. Towed to sea, she was sunk on July 8, 1948