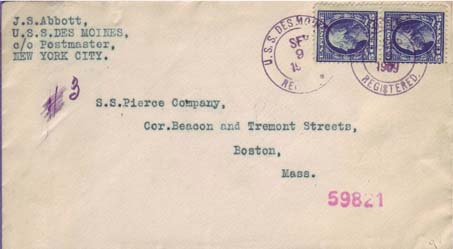 Registered cover from J.S. Abbott, USS DES MOINES to S.S. Pierce Co., Boston, Mass franked with two 5 cents Washington stamps to cover the registered mail rate and canceled with ship type 9v cancel 9 SEP 1909. The addressee was a Boston importer and grocer who probably supplied the ship’s officer’s mess; the envelope may have included payment and was thus sent registered. Only 10-25 known copies of this (R-2) cancel.

This 308-foot Denver class protected cruiser was commissioned on March 4, 1904 with a complement of 339 officers and enlisted men. DES MOINES was assigned with the 3rd Squadron, Atlantic Fleet and operated from Boston (1906-10) before going into reserve status for modernization in December 1911.

Re-commissioned in September 1912, the cruiser served on escort duty with transports during World War I and was the flagship of the naval forces in Northern Russia in 1919.