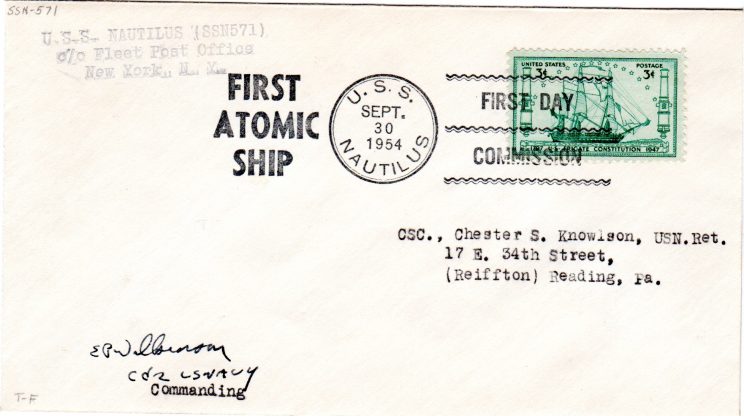 The world’s first nuclear submarine was the US Navy’s USS Nautilus, SSN-571. And with this nuclear power plant design, submarines were changed forever. No longer was there a requirement to surface periodically for air or to run near the surface utilizing snorkels for providing air to the engines. Now a submarine could submerge and remain underwater for weeks or months and simply disappear from view of an enemy.

The sub’s keel was laid in Flag Day 1952, June 14. She was christened January 21, 1954 and commissioned September 30, 1954. Her commanding officer was Commander Eugene Wilkinson.
In July 1958, Nautilus made the first “under the pole” voyage, transiting from Pacific in Alaska to the Atlantic near Greenland. Much of her career was spent evaluating submarine tactics and evaluating anti-submarine improvements. Ultimately her design would be used to make improvements in design of future nuclear submarines. Her last powered voyage was from Groton, Connecticut where she had been based to Vallejo, California for decommissioning on March 3, 1980. Later she was towed back to Groton where she is a museum ship today.

This commissioning cover was signed by Commander Wilkinson. The cancel is rated as R-3, less than 10 known copies, postmarked on September 30, 1954.