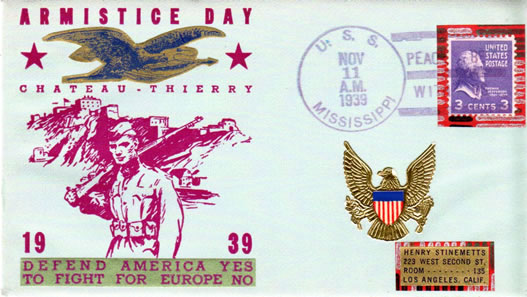 The August and October 2013 issues of the USCS Log had excellent articles on cachet maker Henry Stinemetts. The cachet on the cover this month is a Stinemetts cachet. The cachet marks Armistice Day 1939 and is printed on silk and the silk is glued to the cover. Stinemetts applied 3 stickers plus his address label. The stamp is applied to a piece of gift wrap paper that was glued to the silk. It is an attractive cachet and likely one of kind.

The cover was cancelled aboard the USS Mississippi, a battleship commissioned during World War I in 1917. The battleship was operating on the West Coast in 1939 and the cancel and cachet indicate popular sentiment at the time; yes, defend America but do not get involved in the war that had just broken out 2 months before in Poland. One sticker notes “Defend America Yes, To Fight for Europe No” and the killer bar slogan (probably requested by Stinemetts) reads “Peace Be/With Us.” Of course the cachet topic and cancel date of November 11 mark the 21st anniversary of the end of World War I with the signing of the Armistice in France on the 11th hour of the 11th day of the 11th month of 1918. While the United States was officially a neutral country at this time and President Roosevelt spoke of staying out of the war, he also noted that the American people could not let their wish to avoid war at all costs supersede the security of the nation. He said “When peace has been broken anywhere, the peace of all countries everywhere is in danger.” And in fact the Neutrality Act of 1939 was passed one week before this cover was cancelled allowing trading of arms with belligerent nations on a cash and carry basis. American involvement in the war would progressively ramp up over the next 2 years, leading to the Lend Lease Act in March 1941, allowing the US to provide arms to nations the administration wanted to support. The Famous Fifty group of destroyers would be lent to England, the US began expansion of bases on newly leased land and the Navy Neutrality Patrol, started as early as September 4, 1939, began tracking the movements of belligerent nations in the western hemisphere. This led to the recommissioning of dozens of ships which were in reserve, events we see documented on naval covers of the period.