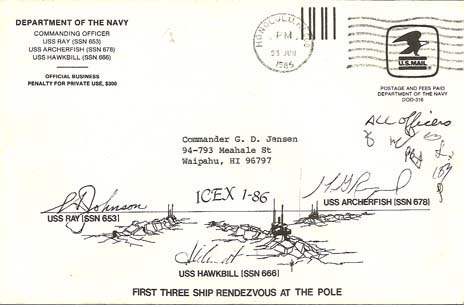 On May 6, 1986, three US Navy Sturgeon class nuclear attack submarines rendezvoused and surfaced together at the North Pole. This event occurred while the submarines were participating in ICEX 1-86, an Arctic Ocean operation. The mission of the submarines was to collect scientific data and test the ability to conduct warfare under the polar ice cap. While the scientific research was important, the Navy took the occasion to signal to the Soviet Union that the US was boosting its attack submarine presence in the Arctic in repsonse to a heavier concentration of Soviet subs there.

The three Commanind Officers of the US subs took the occasion to write a letter about the exercise on the date of the surfacing. This cover was used to mail a copy of the letter to a naval officer in Hawaii. The letter read:

Greetings from the North Pole,

The operations conducted by the USS RAY, USS ARCHERFISH, and USS HAWKBILL are a continuation of hydrographic and oceanographic studies conducted in the Arctic since 1957. The data we collect will enhance the ability of our nuclear submarines to operate, and if necesssary, fight under the polar ice cap.

While submarine operations in the Arctic are not new, each trip under the ice is a challenging and often unique experience for the crew. The many weeks of submerged under the ice operations leading up to today’s rendezvous are a tribute to the dedicated professionalism of our crews and to the superb reliability of our ships.

The cover is postmarked June 23, 1986 in Honolulu, most likely the date that the Hawkbill returned to port in Hawaii.