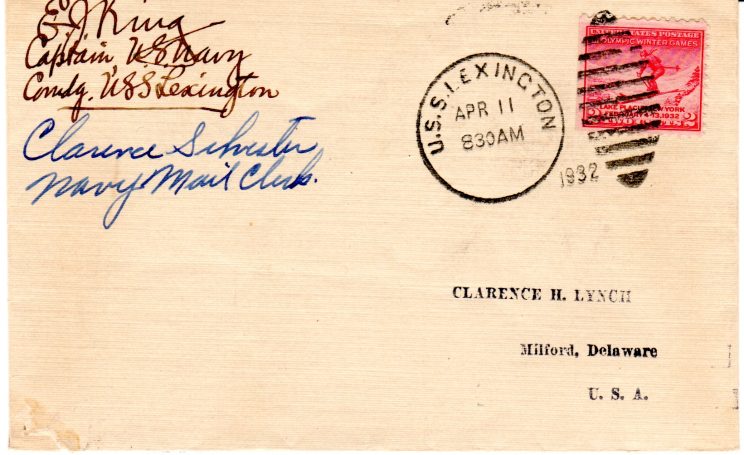 USS Lexington was the third aircraft carrier commissioned by the US Navy. Built on a cruiser hull, she and USS Saratoga paved the way for carrier operations in the Navy. Launched October 3, 1925, she was commissioned December 14, 1927. She immediately began participating in Fleet Exercises where carrier operations really cut their teeth as operations changed and the value of aircraft could be seen.

On June 20, 1930, Captain Ernest J King took command and he participated in Fleet Exercise XII in February 1931. During Grand Joint Exercise No. 4 in February 1932, Lexington and USS Saratoga were able to launch aircraft and make a surprise attack on Pearl Harbor, much as the Japanese would repeat in 1941.

This cover is dated 2 months after that event, April 11, 1932 and signed by the CO, Ernest J King as well as one of the Mail Clerk.

Captain King would become the Chief of Naval Operations during World War II, and the second to be promoted to the rank of five star Admiral, after Admiral Leahy. His next assignment after serving on USS Lexington was the Naval War College.

Lexington would be one of a handful of carriers in the Pacific during the first few months of World War II, along with USS Saratoga and Enterprise. She participated in a couple early morale boosting raids and was in the Coral Sea in May when the first naval battle where neither surface fleet ever was in visual range of the other took place. Lady Lex was hit by torpedoes and bombs by Japanese aircraft and was badly damaged. She was sunk by torpedoes from the USS Phelps to prevent her from falling into Japanese hands.